Posted on March 6, 2014 by Brett David Roberts in College Basketball,Headlines 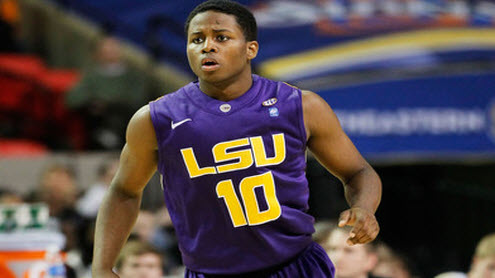 LSU and Vanderbilt have both fared about the same in SEC play. The LSU Tigers are 8-8 in conference play and the Vandy Commodores are 7-9. Neither team is likely to be NCAA tournament bound, so perhaps each is making its bid for the NIT in this contest. The Tigers have lost three of its past five contests but are still 1.5 point favorites according to college basketball oddsmakers at Bovada.

LSU began the season hot, in a manner of speaking. After losing its season opener to UMass, the Tigers reeled off wins in nine of its next 10 contests, but the quality of competition was rather poor. The only tough opponents were No. 21 Memphis and Butler. The Tigers defeated Butler in OT by two points, but lost to Memphis. It was when SEC play began that the season started to unravel for the Tigers. The team has been strong on the glass all season, and ranks 9th in the nation in boards per game.

It has helped LSU that Andre Stringer’s role has decreased. Though the water bug has improved his efficiency a lot this year, and is shooting over 40 percent from the floor for the first time at LSU, he’s still just 42.1 percent and takes a lot of bad shots. Johnny O’Bryant has led the team in scoring with 15.6 points per game and he’s shooting 49 percent from the floor and 50 percent from three-point range. Jordan Mickey also has had a nice season and is averaging 13.4 points and 7.5 rebounds—and perhaps most impressively, 3.4 blocks per game. LSU is a tough team on the interior.

Vanderbilt’s offense has been relatively dreadful this year. The Commodores rank near the bottom of all Division-1A teams in scoring, averaging just 65 points per game and the team is shooting 43.7 percent from the floor this year. The Commodores aren’t exactly closing on a high note, either. The squad has lost four of its past six games and was obliterated by rival Tennessee on Mar 1, losing 76-38. It came just a week after hanging with No. 1 overall Florida, so the team can play when it controls pace and keeps possessions low, but that’s hardly a recipe for sustained success against tough competition.

6’9″ senior forward Rod Odom is the Commodores best player, but he’s not shooting the ball particularly well for a big man. He is just 41.3 percent from the floor, which is only slightly better than his 40 percent from three (on 7.0 attempts per game). Odom has improved every season at Vandy, but would have had to take a much bigger leap into elite territory to bail out his teammates. Vandy will need some four and five star recruits to turn the program around, and it hurts a lot that the only productive player in Odom is graduating.