Posted on October 20, 2018 by Brett David Roberts in College Football,Headlines 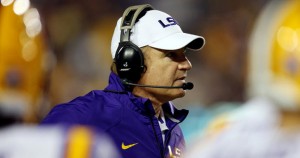 The LSU Tigers are 6-1 after its 36-16 drubbing of then No. 2 Georgia last week. Georgia fell clear to No. 8 in the rankings, while LSU propelled itself into a top-5 sitting. The Tigers now host No. 22 Mississippi State as 7-point favorites at 6 PM (CT) on ESPN. The over/under is set at 45 points according to NCAA football oddsmakers at 5dimes.

LSU’s lone loss of the season came to then-No. 22 Florida, which was costly as it was an SEC game. The Tigers are still 3-1 in SEC play, but it needs to secure victory this week as it eyes Alabama atop the West SEC standings at a perfect 4-0. The Tigers have a No. 17 ranked defense that allows just 16.9 points per game, while its offense ranks middle-of-the-pack No. 50 at 32 per game. The rush attack has been it for the Tigers, generating 202.1 yards per game (no. 37) while its pass attack ranks outside the top-100 at just 202.1 yards per contest.

The Tigers top running back has been Nick Brossette. He has rushed for 640 yards on a team-high 134 carries with nine rushing TDs. Clyde Edwards-Helaire has contributed another 475 yards and five touchdowns while being the only top-back to average more than five-yards-per-carry. Quarterback Joe Burrow ranks No. 3 in rushing yardage with 242 on 58 attempts and four touchdowns, but his passing has left some room for improvement to say the least. Burrow is completing just 53.3 percent of his passes and has six TDs with two INTs. LSU is so dependent on his rushing abilities and on those of their other top backfield performers, that the pass offense has lingered as an area that might need to be improved if the BCS playoffs are in LSU’s future this season.

Mississippi State is 4-2 with a 1-2 mark in SEC play. With two losses in-conference, it is likely already out of contention for any sort of conference crown, being in the same division as undefeated Alabama, and its opponent today, LSU.

The Bulldogs are built much like LSU. It, too, has a top rush offense at 240.7 yards per game, but it is even worse than LSU via the pass at just 190 yards per contest and a No. 105 ranking. The thing that Mississippi State does have in abundance is defense, holding opponents to just 12.7 points per game and ranking best in the nation. It scores 31 per game, which is good for a positive-19.3 point differential.

The Bulldogs top rusher has been its quarterback Nick Fitzgerald. Fitzgerald has thrown for just 709 yards and completes under 50 percent of his passes, but he has rushed 98 times for 513 yards and seven touchdowns, leading the team in all three categories. Kylin Hill has added another 474 yards and three TDs, and Mississippi State averages 6.0 yards-per-carry as a team.

Keytaon Thompson leads the team with 10.7 yards-per-attempt on his 15 carries. Osirus Mitchell leads the team in receiving yards with 242 and two TDs, but the Bulldogs have scored just nine TDs via the pass while having managed 15 rushing the football. It is a pretty one-dimensional attack, but its defense will keep it in the game this week and this one should be a close game. It might not be a high scoring game, but it should promise to be one of the most exciting in Week 8.