Posted on September 15, 2018 by Brett David Roberts in College Football,Headlines 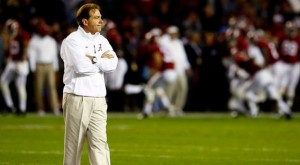 No. 1 ranked Alabama won its first two weeks by a collective score of 108 to 21, knocking off Louisville 51-14 and Arkansas State 57-7 last week. This week the Crimson Tide travel to face Mississippi at 6 PM CT on ESPN, with Alabama heading into the game as 21-point favorites with an over/under set at 71 points according to NCAA Football oddsmakers at bookmaker 5dimes.

Bama thus far has got great production from its top two quarterbacks. Tua Tagovailoa has thrown 25 of 35 for 455 yards with six TDs, and Jalen Hurts is 12 of 18 for 163 yards with two TDs. Hurts has rushed for another 41 yards on eight attempts, as well. Najee Harris has 165 yards on 21 carries this season with a long-rush of 26-yards and two TDs. Damien Harris is the No. 2 back with 116 yards on 19 carries, including a long rush of 32-yards.

Josh Jacobs has rushed 11 times for 5.4 yards-per-carry and a TD. Alabama averages 5.8 yards per rushing attempt, a testament to not only the speed in its backfield but also the top-notch protection afforded by a massive and powerful OL. DeVonta Smith has caught seven passes for 176 yards this season, and Jerry Juedy is No. 2 in receiving yards with 151 and a team-leading four touchdowns. Kicker Austin Jones has missed three extra points already, but field goal kicker Joseph Bulovas is 5 of 5 with a long-kick of 39 yards. Jones has missed 1 of his 2 field goal attempts, already too.

Mississippi is 2-0 after defeating Texas Texas 47-27 in Week 1 and Southern Illinois 76-41 in Week 2. The Week 2 game was a thriller, with 117 total points scored in the affair, highlighted by 448 passing yards and five touchdowns from Ole Miss QB Jordan Ta’amu. Scottie Phillips rushed for 107 yards on 15 carries with two TDs, and Isaiah Woullard and backup quarterback Matt Corral each rushed for a touchdown apiece as well.

WR AJ Brown had 158 receiving yards and two TDs, and four receivers totaled 50 yards or more. Defensively, Mohamed Sanago had a huge game with 11 total tackles and seven solo, while Josiah Coatney, Zedrick Woods, Ryder Anderson, Vernon Dashler, and Willie Hibbler all had five tackles apiece. Ole Miss can really move the football, and having a talented rush threat like Phillips and his backup Tylan Knight, should give the Rebels a better overall offensive outlook in 2018.