Houston Astros SP Roy Oswalt has absolutely dominated the Reds in his career, as he looks to become the franchise’s all-time leader in wins. 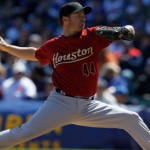 Cincinnati is set to play the second game of this three-game series, which happens to be in the middle of playing 15 of 18 games versus NL Central opponents.  The Reds are in second place in the division for the sixth straight day after spending the previous 18 days on top of the standings.  “We’re trying not to scoreboard-watch too much, but it’s obvious that we do,” outfielder Jay Bruce said.  Cincinnati stands at 38-27 in night games this season (+1,130) with the total being 38-24 O/U in those contests.  The club also finds itself in an advantageous position, going 9-3 as a road underdog of +100 to +125 this year (+750), which is consistent to the 36-29 mark its posted over the last three seasons.

Houston’s struggles continued on Friday night against Cincinnati, dropping to 1-6 in the season series, as they are the only NL Central club the Astros don’t have a winning record against.  The team has lost 15 of its last 17 meetings against the Reds, after going just 2-for-14 with runners in scoring position and stranding 10 runners on base in the series opening loss.  “There’s not doubt that we were able to get the guys up there that we wanted to give us a chance to at least tie the thing or win it,” Astros manager Brad Mills said.  The club is now 8-9 this month (+70) and 33-36 in July over the last three years (-220).  Houston has managed to average just 3.5 runs and combined for a .238 average against right-handed starters this season, leading to a disappointing 28-45 mark in those contests.

Astros starting pitcher Roy Oswalt is 6-11 with a 3.12 ERA in 19 starts this season, with the club’s offense managing to score just four runs in his last five starts.  The right-hander has tallied a dismal 2-8 record despite having a solid 3.48 ERA in 11 home starts, allowing opponents to hit for a combined .222 average.  Oswalt has made three starts this month, going 1-1 with a 0.90 ERA, as he’s managed to strike out 20 batters and walk just four in 20 frames.  In 33 career appearances (31 starts) versus the Reds, he is an astounding 23-2 with a 2.62 ERA.

Bettors may get aggressive in playing Oswalt in this situation due to the Reds being 0-2 this year and 1-7 the last three years on the road with the total is 7 or less.  The strength of this play lessens when finding the Astros being 1-5 at home in the same situation.