A pair of Cy Young Award winners square off in a crucial contest in the National League playoff race at Busch Stadium. 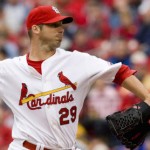 San Francisco captured a 6-3 road victory over the Cardinals in the opening game of this three-game series in St. Louis.  The Giants are now 9-9 in August after completing a 20-8 July, but the club is happy with its recent results overall.  In 83 games of scoring three-or-more runs in a game, the team has produced a 62-20 record (.756), which is the second-best winning percentage in the majors in that particular situation.  The club is 3-4 in its current 12-game stretch in which they play against opponents in the heart of the playoff picture.  San Francisco has posted a 32-31 record on the road this season, which is the fourth-best mark in the National League behind San Diego, Cincinnati and Florida.  The team has compiled a 5-7 record as a road underdog of +125 to +150 this season (-30) and the total is 8-4 O/U in those contests.  It’s also important to state the Giants are 12-7 when playing on Saturday (+600).

Giants starting pitcher Tim Lincecum is 11-7 with a 3.62 ERA in 25 starts this season and has dropped three straight games for the first time in his career.  Over that span, he has given up 15 runs (14 earned) and 22 hits over 14 innings of work.  San Francisco has still won 16 of his 25 starts this season.  The right-hander has produced a 4-2 record and 3.23 ERA in 12 road starts, issuing 27 walks and 82 strikeouts in 78 innings of work.  Lincecum is scheduled to make his sixth career start against the Cardinals and second this season.  He has produced a perfect 5-0 mark and 1.54 ERA in his previous five assignments, with all being quality starts.  In his last three games against the Redbirds, he has given up just a single run in 23 innings.

St. Louis continues to fall in the NL Central race and the offense has managed to produce just 3.2 runs a game over its current five-game losing streak.  “It’s not just our offense, we need to play better,” said first baseman Albert Pujols.  “There are a lot of different things that we aren’t doing the right way.”  The team trails Cincinnati by four games in the division and are now three games back in the Wild Card race.  The Cardinals are 6-7 versus the Giants at Busch Stadium III where they hold an overall record of 223-162.  The club is 8-1 at home when the total is 7 or less this season (+640) and the total stands at 7-2 O/U in those games.  Don’t look past the team’s 7-12 mark on Saturdays and the total being 4-14 O/U in this situation when handicapping.

Cardinals starting pitcher Chris Carpenter is 13-4 with a 2.95 ERA in 26 starts this season and the club dropped his last outing after winning six straight games with him on the hill.  In that 3-2 home defeat to the Cubs, he allowed three runs and six hits in six innings of work, while issuing not a single walk and striking out three.  The right-hander has produced a 9-3 mark and 2.85 ERA in 15 home starts, allowing opponents to hit for a .223 combined average.  He has also produced an even 3-3 record and 3.66 ERA in eight daytime starts compared to a 10-1 mark and 2.66 ERA at night.  In six lifetime outings versus the Giants, Carpenter has posted a 3-1 record and 3.98 ERA.