Posted on August 14, 2010 by Jeff Mattinger in Baseball,Headlines

Both pitchers find themselves in a situation to dominate opposing hitters in the second game of this three-game series at Busch Stadium. 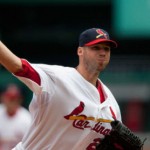 Chicago has lost 14 of its last 16 games including a 6-3 defeat in the first game of this three-game series against its main NL Central rival.  “We just didn’t hold the game in check,” manager Lou Piniella said.  The Cubs are now also 1-7 in their 17-game stretch in which they face teams that either rank first or second in their division.  The club is now 12-26 in series openers this season. Offensively, the team is awaiting the return of 3B Aramis Ramirez, who was withheld from Friday’s lineup with a sore left oblique muscle.  Chicago has been a road underdog of +200 to +225 just once this year (-100) and three times over the last three seasons (-300).  The team is a disappointing 26-33 in day games in 2010 (-1,550) and the total stands at 29-27 O/U in those contests.  The Cubs average 4.5 runs and hit for a combined .258 average under the sun.

St. Louis is looking to capture its fourth consecutive home series over the Cubs and the club has taken eight of 10 meetings at Busch Stadium since the start of last season.  “Any time you can get a ‘W’, that’s why you pitch, to win ballgames,” Friday night starting pitcher Jake Westbrook said.  “But more important, the team won.”  The win allowed the Cardinals to stay one game ahead of the second-place Reds in the NL Central race, with the team winning four straight and six out of seven.  The club is a solid 6-1 this season (+380) and 8-2 over the last three campaigns (+340) when made a home favorite of -225 to -250.  It’s important to note that the Cardinals are 7-3 this month (+240) and the total stands at an impressive 8-1 O/U over that span.

Bettors will likely shy away from the road team in this contest even with the value seemingly being on the Cubs with Zambrano’s past performances at Busch Stadium.  It’s hard to ignore the Cardinals 38-18 home record this season (+680) and the team’s 47-12 record in Carpenter’s last 59 home starts.