The pressure is squarely placed on the Nationals offense with their young superstar on the hill. 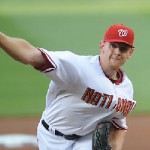 New York has won two of its last three games, including a 5-3 victory on Friday night.  The Mets are 25-12 in their last 37 contests dating back to May 22, which is the second-best mark in the majors over that span (Boston).  Overall, the Mets are 17-23 (-410) on the road, but they have won two of three games away from Citi Field.  New York has scored at least one run in the first inning in its last four games, producing a 37-14 mark when scoring first.  The offense has been led by 3B David Wright’s NL-leading 63 RBI, which ranks third in the majors.  The Mets have not dropped a season series to the Nationals/Expos franchise since 2003.

Mets starting pitcher R.A. Dickey is 6-1 with a 2.98 ERA in eight appearances (six starts) this season (+450) and looks to bounce back from his first loss of the season.  He allowed five runs and five hits in five innings of work in a 10-3 road loss to the Florida Marlins.  Before that loss, the right-hander picked up six straight victories, with the club outscoring opponents 38-12 over that span.  Dickey finished June 4-1 with a 3.06 ERA in five starts this season.  The four wins finished tied for third-most in the majors during the month.  He has allowed just two home runs this season in 51.1 innings pitched.

Washington has managed to score just six runs in three games while the team looks to improve upon its 21-17 home record (+460).  The Nationals current home record may lead to a drastic improvement at the end of the year, with the club recording a 33-48 mark in 2009 and 34-46 in 2008.  Playing against divisional rivals was a losing venture last year (21-32), but Washington stands at an even 14-14 this season (+700).  The Nationals currently hold a 6-4 series lead heading into this nationally televised contest.

Nationals starting pitcher Stephen Strasburg is an even 2-2 with a 2.27 ERA in five starts this season (-310).  The right-hander will be making his fourth home start of the year, going 1-1 with a 1.80 ERA while striking out 33 batters and not issuing a single walk.  He has gone 0-2 with a 2.33 ERA over his last three starts due to the offense providing just a run in support.  “I feel for him.  I feel for our whole ball club,” manager Jim Riggleman said.  Strasburg has been brilliant in two daytime starts, posting a 1-1 record and 1.59 ERA.  He will be making his first career start against the Mets this afternoon.