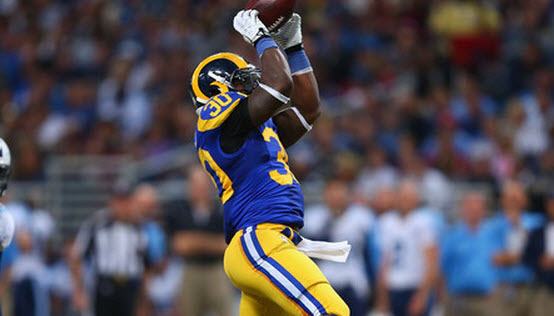 The Saint Louis Rams had trouble building stability last year, largely due to the fact that it played nine games with the backup QB.

The Rams looked to build on last year’s deficiencies through the draft, and while it may take a couple seasons for the rookies to reach full-impact level, the profile of the Rams’ two highest picks is enough to give the franchise hopes for a better tomorrow.

Quarterback Sam Bradford should continue to improve with the stability the Rams have afforded him by retaining Brian Schotenheimer as offensive coordinator. The Rams will again seek to establish a strong run game, and that should open things up for Bradford and the receivers to make some big plays. That will require Tavon Austin and Chris Givens to step up this season.

The Rams (wisely?) passed on Johnny Manziel in the draft, and selected Garrett Gilbert in the sixth round out of SMU. Shaun Hill was also signed to back up Bradford, but he’s virtually done as an NFL quarterback after a rather mediocre stint as a starter in the league and is now 34 years old. Bradford is a former No.1 overall draft pick, so the Rams are wise to put all its hopes on him, and keeping Bradford healthy is obviously a must.

The offensive line should be much improved and up to the task, particularly so since the Rams spent its No. 2 overall selection on Greg Robinson. Rodger Saffold returns, too, since he failed his physical after agreeing to terms with the Oakland Raiders. Robinson and Saffold should go a long ways towards protecting the franchise QB as well as creating holes for runningbacks Zac Stacy and rookie Tre Mason.

Stacy racked up 1,000 yards last season in about 12 games worth of plays. Mason will bring an element of quickness to the run that Stacy doesn’t have. Former TE Cory Harkey sees time at fullback and still occasionally lines up at tight end. Along with either Isaiah Pead or Daryl Richardson, he’ll round out the Rams quartet of talented backs.

The WRs Bradford will pass to are all young and unproven. The loss of Sammy Watkins and suspension of Stedman Bailey will put early pressure on veteran Kenny Britt and Brian Quick. Tavon Austin is good for big plays, but will need more of them if Schotenheimer’s offense is to improve.

Chris Givens looks to be more up for the challenge after working hard over the offseason following a sub-par year in 2013-14.  Austin Pettis will also have a nice impact after receiving 399 yards last season.

TE Jared Cook had a good year last season and Lance Kendricks will eventually be a solid option in coming seasons. The receiving corp has a lot of work to do with Bailey’s suspension, and the Rams are going to struggle at lot in the early season, and also be more heavily dependent on the run.

Gregg Williams will be defensive coordinator this season. The defense has the chance to be very good, potentially even a top-10 unit in the NFL. Williams is a brilliant coordinator who should be able to maximize the talents of a defensive unit that is hardly bereft of potential or skill.

The defensive front is one of the best in the league, and the LBs are better than most realize. The Rams secondary, however, is as close to putrid and pathetic as a unit can be. It will be up to Williams to minimize this weakness.

On the DL, the addition of 1st round tackle Aaron Donald promises to add another defense disrupting pass rusher. Robert Quinn and Chris Long are a great pass rushing tandem too, and Quinn led the NFC with 19 sacks last year. Long has averaged 10.5 sacks over the last four seasons. The team has very good depth on the line too. Michael Sam will have trouble cracking the rotation, but is a sensational side-story for a Rams team that sort of needs it. Sam is undersized; but along with William Hayes and Eugene Sims he’s part of a group that is the best backups at the position.

The LBs are solid too. Alec Ogletree is a great sideline-to-sideline coverer. James Laurinatis is consistently good and has a high football I.Q. Jo-Lonn Dunbar has a lot to prove after being suspended for PEDs already, but he still has a lot of potential that the Rams aren’t quick to give up on. Dunbar is a great run protector. The LBs lack depth, but Ray-Ray Armstrong could help shore up that.

As stated, the secondary is pretty pitiful. The Rams allowed a lot of big plays on the back end, and Cortland Finnegan proved to be a bust. Janoris Jenkins and Trumaine Johnson are the only CBs on the team that have been starters in their careers. Jenkins is not great at tracking down deep passes and makes a lot of poor decisions that result in penalties (every coach’s bane).

Johnson has the tools, but lacks the mind to be a great CB. 2nd round pick Lamarcus Joyner will play the nickel and he’s a solid presence capable of making big plays. Strong safety T.J. McDonald played reasonably well last season after coming back from a broken leg. All in all, there’s just not much upside in this unit with all of its members lacking crucial traits for successful secondary players.

The Rams kick game is exceptional. Johnny Hekker became consistent last season and made the Pro Bowl. Hekker averaged 44.2 yards per punt, which was a testament to the Rams exceptional coverage. Kicker Greg Zuerlein added accuracy to his distance and missed only twice last season. Austin is great for punt returns. His blazing speed makes for a lot of big returns. He lost 188 yards due to penalties last season, so the unit will have to be better about maximizing his impact.

The Rams have been knocking on the door of being a good team for the last two seasons, after winning seven games in consecutive years. Robinson should bring a good payout for the RGIII trade that brought the Rams a wealth of high draft selections. Bradford has to remain healthy and the OL makes it likely he will.

Gregg Williams has a heady task with the defense, given the inadequacies of his secondary. That, in addition to playing in the toughest division in the NFL, will make it difficult for the Rams to finish about .500. Doing so would bring a modest improvement of just one win, but the team is scratching and clawing to improve through the draft. It may eventually be rewarded if the prospects pan out.