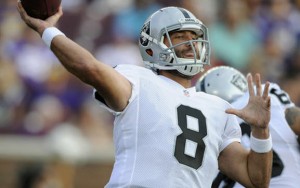 The Oakland Raiders are going to have a huge turnover with 12 new starters including a new QB for the fourth straight season. The Raiders are also stuck with one of the toughest schedules in the league and it features four games against NFC West teams, six games against divisional playoff teams, and one against the New England Patriots. The Raiders finished just 4-12 last season, and with so many new starters, only modest improvement is expected.

The Raiders will be a heavily run-dependent team with Darren McFadden and Maurice Jones-Drew to carry the football. The OL is revamped which will help the backs find more holes, and QB Matt Schaub may finally be the QB the Raiders need to establish some stability at the position. Second year offensive coordinator Greg Olson will give Schaub some opportunities to air it out, and he was successful doing such with the Houston Texans.

Schaub may be that answer finally after going through Carson Palmer, Matt Flynn, Terrell Pryor and Matt McGloin and finding all four to be unsuitable for the job. The Raiders believe Schaub can man the position for the next three or four seasons at least, and second round draft pick Derek Carr will learn a lot playing behind him. Schaub is a great fit for Olson’s offense and Olson tends to keep all the receivers involved. Schaub’s mobility will help a lot in giving him better decisions on the field, but he struggled badly with Houston last season.

McFadden still has yet to cash in on the potential that made him a No. 4 overall pick in 2008. He was great in 2010 and 2011, averaging 5.2 and 5.4 yards per carry. However, over the last two seasons he has been good for only 3.3 yards per carry. Jones-Drew will be a replacement for Rashad Jennings, who signed with the New York Giants. McFadden’s health has always also been an issue, making the signing of Jones-Drew a necessary one. Jones-Drew may eventually even emerge as the No. 1 back, and will likely split these early season carries as Oakland decides on the best option.

The receivers lack a proven No. 1 option, but the position does have good depth. The quartet of Jones/Moore/Streater/Holmes is very solid and Schaub will make the most of all four of them. Streater’s consistency dictates that he’ll likely get the most throws, but Moore has the ability to make a lot of big plays and Jones is going to have a much bigger role than he had in Green Bay where he never amassed more than 817 yards in a season.

The Raiders will enter their third season with defensive coordinator Jason Tarver. The D will feature five or six new starters, but Tarver will benefit form a host of talented and experienced players and he’ll look to put the pressure on opposing offenses. The Raiders lost their best DL to free agency, Lamarr Houston, who signed with the Bears.

Vance Walker and Jason Hunter also left via free agency. Justin Tuck should be a good sack threat, and Woodley had 11 sacks from 08-11, but has had just nine the last two seasons combined. Depth on the DL is also poor. The Raiders LBs return three starters and first round draft pick Khalil Mack (5th overall) will add tremendous talent to the unit. The secondary has different starting CBs with Carlos Rogers and Terrell Brown manning the positions. The Raiders have two solid options at safety with Tyvon Branch, Charles Woodson. The health of the secondary is crucial.

Sebastian Janikowski had one of the worst seasons of his career last season. He missed nine field goals at 30 yards and had a 70 percent (league worst) success rate. The Raiders expect him to bounce back strong, but from an NFL worst season, how strong is questionable. Taiwan Jones and Greg Jenkins are the returners and the Raiders are hoping both are suitable for the job once again.

The Raiders got older and more experienced over the offseason, but it’s doubtful the team will make any dramatic improvement and NFL oddsmakers at Bovada certainly agree with this assessment. The tough schedule is the biggest knock against believing the Raiders will amass any more than one or two wins more than last season, and the team is about to hit a full-on rebuilding phase.