Posted on December 20, 2015 by Brett David Roberts in Headlines,NFL 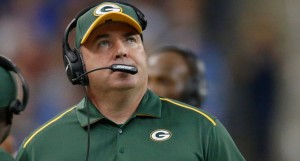 The Green Bay Packers are 9-4 an sit atop the NFC North, and it will travel to face a 6-7 Oakland Raiders team on its home turf. The Pack is still favored by 3.5 points in the affair which will air at 3:05 PM CT on FOX.

The Packers are 4-2 on the road this season and are riding a two game win streak that featured wins over the Detroit Lions and Dallas Cowboys. Last week’s win over the Cowboys was a 28-7 trouncing as Aaron Rodgers threw 22 of 35 for 218 yards and two TDs. Eddie Lacy was the star of the game with 24 carries for 124 yards and a TD.

No. 2 back James Starks also had a nice game with 71 yards on 11 carries and a TD of his own, too. Rodgers’ top receiving target Randall Cobb caught eight passes for 81 yards, while Starks came out of the backfield to catch four passes including a TD catch. James Jones caught four passes for 49 yards, too.

Lacy has had a good, if unspectacular season. He has rushed for 641 yards with a 4.2 yard per carry average, and Starks has more or less split carries with 515 yards and a 4.0 yard average. Rodgers actually has the best per-carry average on the team with 6.2 yards per attempt, and he has one of the team’s seven rushing TDs. Lacy has three and Starks has four.

The Pack has, of course, done far more damage in the air. Cobb has 65 catches on 111 targeted passes for 737 yards and six TDs. James Jones has caught 35 passes for 660 yards (team best 18.9 yards per catch) and has seven TDs on the season. Starks has performed his dual-threat role well, with 369 receiving yards and three TDs on the year. Green Bay has 28 receiving TDs and it is reflected by Rodgers 227.8 yards per game.

The Raiders have won two of its past three games with victories over the hapless Titans and a three-point win over the Denver Broncos last week. The Raiders scored all 15 of its points in the second half, as the defense sacked Brock Osweiler five times. Derek Carr had a horrible game but was just good enough in the end to get Oakland past a tough Denver team.

Carr was 12 of 29 passing with just 135 yards, but he threw two TDs without recording a pick. Carr was sacked three times for a loss of 36 total yards, but still finished with a 79.0 passer rating in a rather poor performance. RB Latavius Murray rushed 13 times for just 39 total yards, and that was basically all Oakland got on the ground.

Murray has been inconsistent this season, though he has 878 yards on the year. His 4.1 yards per carry is not bad, but he has had few standout plays and he has four fumbles on the season. On Sept 27, he had 139 yards against the Cleveland Browns, but since that point he has averaged just 3.15 yards per carry while he has not scored a TD in the past five games. He has basically been the entire backfield, so perhaps his 215 attempts are now taking their toll on him. The Raiders have only carried the ball 90 times not in his hands, and it has no number two back to speak of.

Carr has thrown for 3,313 yards on the year and has a 62.2 percent completion ratio. He has thrown 28 TDs and nine INTs on the season (2.0 percent INT ratio), but he has been sacked 19 times for 140 lost yards. Carr’s top target Amari Cooper has had a monster season with 920 yards on 62 catches, while Michael Crabtree is still very effective and leads the team in receiving TDs with seven.

The Raiders have scored 30 TDs via the pass and just six rushing the football, so the M.O. is predictable, even if the Raiders have been reasonably successful this season (at least comparative to the past shipwrecks). To find itself just 3.5 point dogs to a tough Green Bay team is a good indication of how much progress the Raiders have made in 2015.