Posted on September 16, 2017 by Brett David Roberts in Headlines,NFL 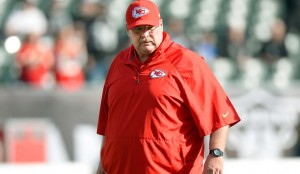 The Philadelphia Eagles opened its season with a Week 1 victory over the Washington Redskins, defeating Washington 30-17. Week 2 could prove to be a bit tougher, as Philly travels to face Andy Reid’s Kansas City Chiefs as 5-point underdogs in Week 2. The game is due to air at Noon (Central) on FOX and has an over/under of 47 points.

The second-year man from North Dakota State was sensational in throwing 26 of 39 for completion and amassing 307 yards, with two TDs in the game. Wentz did throw an interception and fumbled once, but he looked great and appears to be primed for much bigger things in his sophomore season.

Last year, as a rookie Wentz played all 16 games and threw for 3,782 yards while completing 62.4 percent of his passes, but his TD to INT ratio was pretty poor. Wentz had 16 TDs and 14 interceptions a year ago, along with nine fumbles on the year. All of that could be attributed to rookie jitters and mistakes, though, because the former No. 2 overall pick in 2016 has all the tools to be a premier quarterback in a city that is accustomed to having them.

The 24-year-old quarterback made heavy usage of his top two receivers, with Zach Ertz catching eight passes for 93 yards and Nelson Agholor catching six for 86 yards and a TD. LeGarrette Blount was disappointing in the backfield with just 46 yards on 14 carries, and Philly had just 58 rushing yards in the game, but it was hardly necessary with the way Wentz and his receiving core were moving the ball down the field.

Moreover, Philadelphia’s attacking defense did its job in limiting the Redskins’ backfield to just 34 yards, with 30 more coming from quarterback Kirk Cousins. But Cousins was just 23 of 40 and averaged only 6 yards per completion, while also getting sacked four times for an outstanding lossage of 40-yards. Considering the lack of rush attempts, Philadelphia did an excellent job of containing Terrelle Pryor Sr. and Ryan Grant, though both had 60 yards or more. The Eagles trailed led 16-14 at the half and proceeded to outscore the Redskins 14-3 over the final two quarters.

Kansas City won Week 1 in big fashion, defeating the New England Patriots on the road 42-27. Alex Smith threw for 368 yards on 28 of 35 passing with four TDs, and Kareem Hunt was superb in unexpected fashion as he amassed 148 yards on 17 carries and five receptions with a pair of TDs, one receiving and one rushing. The other rushing TD came from Charcandrick West on his lone carry. Tom Brady looked mortal against the Chiefs defense, with the legend throwing just 16 of 36 for completion and getting sacked three times for a total lossage of 20 yards.

The Patriots’ backfield spread the work out, but was largely ineffective in averaging just 3.5 yards per carry on its 35 attempts. Overall, Kansas City dominated the powerhouse Patriots on both ends of the field, and that should be concerning to Philly as it gives Kansas City excellent momentum from which to start its 2017 season. Hunt is a No. 86 overall pick from Toledo who could be on the verge of a big rookie season.

Many pundits are very high on Hunt, and many fantasy owners feel foolish for sitting the rookie in Week one, but this week we will find how just how fluke-like the game was or was not. Hunt showed the tools to be a dual-threat back, and though he did fumble in his debut, it is hard to find much fault with his overall dominance.

With both offenses having clicked in Week 1, the betting total on this seems a tad low, but to say that would be to diminish the strength of two very strong defenses, as well. This should be an excellent showdown between two teams with the potential to be surprises in 2017. Due to Kansas City being at home, and the fact that we trust Hunt more than Wentz, between the relative unknowns, Kansas City should prevail by a slim margin, but possibly not cover the 5.5-point spread. This game offers the chance to be a very close game that enthralls NFL fans and bettors alike.