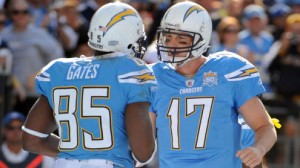 Two teams who are among the favorites to meet in Dallas for Super Bowl XLV square off here when the Cowboys (1-1) visit the San Diego Chargers (1-0) on Saturday.  Both teams fell short of expectations last year when they each lost in the divisional round of the NFL playoffs, but they have not lost focus with their sights set on a much bigger prize this season.

The Chargers are small favorites between -2 and -3 depending on where you shop after winning the last two meetings with the Cowboys.  San Diego has won 12 of its last 13 games dating back to last season and earned a 20-17 victory at Dallas last December 13 during an 11-game winning streak.  That streak came to an end for San Diego with a 17-14 loss to the New York Jets, who advanced to the AFC Championship Game before falling to the Indianapolis Colts.

The Cowboys have continued to disappoint offensively in the preseason following a 34-3 road loss to the Minnesota Vikings in last year’s playoffs.  Dallas has yet to score an offensive touchdown in two games despite going 1-1 and hopes a change of scenery to Oxnard, California for the last couple weeks of training camp can help the team find the end zone.

The weather in California has been approximately 40 degrees cooler than it was in Texas, helping the Cowboys get into better shape and practice harder for this game than the previous two.  Dallas kicker David Buehler has been the star of the team through the first two games, connecting on six of seven field-goal attempts in an effort to win the starting job.  The Cowboys lost starting offensive tackle Marc Colombo to a right knee injury in a 17-9 loss to the Oakland Raiders last week, which is especially critical with Alex Barron already out with an ankle injury.

While Dallas has struggled on offense, the Chargers are looking to build off a dominant 25-10 win over the Chicago Bears last week.  San Diego rookie RB Ryan Mathews had an impressive debut with 50 yards on nine carries in the team’s first game without former All-Pro LaDainian Tomlinson, who was known for not playing in the preseason.  Mathews had to carry the load with backup Darren Sproles out with a shoulder injury.  Curtis Brinkley, another rookie out of Syracuse, added 36 yards on five carries.  Sproles has returned to practice though and is expected to play.

The Chargers will be without linebacker Shawne Merriman due to an Achilles’ tendon injury that has kept him out of practice since Tuesday.  Merriman ended his contract holdout a little over a week ago but hopes to get healthy by the regular-season opener at Kansas City.  Wide receiver Vincent Jackson is still holding out and could be traded to the Seattle Seahawks, who are actively pursuing a deal.  San Diego sent Jackson and offensive tackle Marcus McNeill letters informing them that they would be placed on the Roster Exempt List if they did not sign their tender offers by Friday.  That means both players would be ineligible to play for three games after they sign.

We have released a premium pick on this game for members.  Be sure to get our expert opinion against the spread on this game by signing up for our NFL football picks package for Saturday.