Posted on October 5, 2010 by Grant Van Sant in Baseball,Headlines 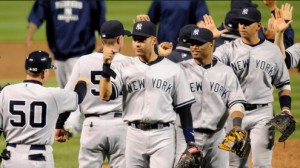 In making their 15 appearance in the playoffs in 16 years, the defending champing Yankees appear vulnerable heading into the postseason. The Yankees, who are trying to be the first team to repeat since they did it in 1998-2000, finished the season 13-17 and missed winning the division by one game to the Tampa Bay Rays.

So they have to enter the playoffs as a wild card and start off on the road, against the Twins. But the Yankees, once a playoff spot was secured, did not appear to much value on winning the division. Manager Joe Girardi rested regulars and did not overuse his bullpen heading into the playoffs.

Last season, the Yankees swept the Twins in the playoffs. The Twins are trying to exorcise some playoff demons. Minnesota has lost nine straight postseason games and hasn’t won a playoff series since 2002. The Yankees are 9-2 against the Twins in the ALDS the past 10 seasons and have dominated head-to-head matchups in the regular season as well. The Yankees won the season series, 4-2.

The Yankees have a potent lineup with Alex Rodriguez and Mark Teixeira at the center of it. A-Rod had 30 home runs and 125 RBI, while Teixeira had 33 home runs and 108 RBI.

Center fielder Curtis Granderson has picked up his game and could be moved up higher in the lineup against right-handers.

The Twins were hoping for the return of Justin Morneau,, but he has been ruled out of the playoffs, still suffering from a concussion. Joe Mauer is the center of the lineup. But DH Jim Thome and right-fielder Jason Kubel have had some big hits

The bookmakers have opened the Yanks as a -200 favorite over the Twins and they have seen more money come in on Minnesota driving the line down and the current odds are now New York -175 with +155 take back on the Twins.

The Yankees were 4-2 (+1.8 Units) against the Twins this season, and 4 of 6 games in this series have gone under the total.

Besides Sabathia, the Yankees pitchers have been inconsistent. The Yankees need Sabathia to win the opener or an upset could be brewing.  The Yankees have enough offense to outslug the Twins and win the series in five games.