Posted on March 27, 2014 by Brett David Roberts in College Basketball,Headlines 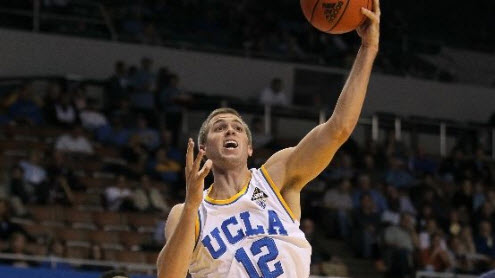 The No. 1 seeded Florida Gators have had a tough defense all season, but will receive a unique test when it faces the UCLA Bruins. UCLA has averaged 81.5 points per game this season, and college basketball oddsmakers set the total at 138 for the contest. The college basketball odds also showed Florida with a five point edge over UCLA in Sweet 16 play on CBS.

6’9″ point guard Kyle Anderson of UCLA has seen his stock continue to skyrocket. NBAdraft.net lists Anderson as the No. 5 selection in its most recent mock, and his versatility has given teams fits all season. Anderson has a 7’3″ wingspan and a great skill set to go with his agile body. He averaged 14.7 points, 8.7 rebounds and 6.5 assists per game this season for the Bruins.

Zach LaVine is also expected to be a lottery pick, and the freshman has averaged 9.6 points per game. 6’5″ sophomore guard Jordan Adams led the Bruins in scoring with 17.4 points per game and he had 21 in the win over Tulsa and 19 in the win over S.F. Austin. He’s shot the ball well so far this tournament, 15-of-24, and is also averaging 6.5 rebounds and 3.5 assists per game.

Florida defeated Albany and Pittsburgh thus far in the NCAA Tournament. Neither game was particularly close, with the Gators averaging a 14 point win margin. Scottie Wilbekin led the Gators in scoring with 21 points on 9-of-15 shooting in the win over Pitt. The Gators held Pittsburgh to 37 percent shooting and came up with 10 steals.

Wilbekin will be needed to score again in addition to covering Anderson, so his task is going to be tough one. At just 6’2″, Wilbekin gives up 7-inches to Anderson and the Gators can’t have him fade on offense; it needs the 13.1 points he provides nightly. The Gators also need Casey Prather to be more involved. He attempted just six shots in the win over Pitt, but has led the Gators in scoring this season at 14.1 points per game. Prather shoots 60.7 percent from the floor largely in part due to his good shot selection, though.