Posted on November 12, 2013 by Brett David Roberts in College Basketball,Headlines 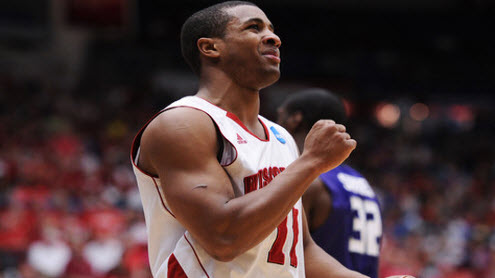 Billy Donovan and the Gators are preparing to play in one of the tougher venues in college basketball, and despite being ranked much higher than the No. 20 Wisconsin Badgers, college basketball oddsmakers at 5dimes find the home team to be six-point favorites in a matchup which will air on ESPN 2.

The Gators squeaked by a poor North Florida team on Friday, but Donovan’s squad was shorthanded. Casey Prather scored a career high 28 points after averaging just 6.2 points per game last year as a junior, and Prather knows he will be counted on heavily for both leadership and scoring this season. “It’s my last year, so I’m just trying to be as aggressive as I can,” Prather commented.

Donovan is most concerned about the lack of defense Florida exhibited in its last game. The North Florida Ospreys sank nine of its final 15 three pointers and the Gators were also out-rebounded in the contest. Those glaring deficiencies will almost certainly lead to an “L” against a much tougher opponent tonight.

How hard is it to win in Wisconsin? The Badgers are 90-7 at the Kohl Center in non-conference games under current coach Bo Ryan, and the team has gone 30-11 at home against Top 25 teams in the last 13 years.

The Badgers boast a great shooting lineup, so Florida will need to be careful to close out all jump shooters and box out. Josh Gasser of Wisconsin said the team was wise to take advantage of its great shooters and five Badgers scored in double figures, including Gasser who put up 19 points to go with his eight boards. He missed all of last season with a torn ACL, but will be a featured part of a tough Badgers team this season.

In the last meeting between the teams, the Badgers lost badly in Gainesville, falling by 18 points as the squad was out-rebounded 40-21. Wisconsin has won 15 consecutive home openers, and this would be a big bang for the Badgers to knock off the 11th ranked Gators to start its season.

Wisconsin Trends: UNDER 8-2 in last 10 vs Southeastern Conference.

Check out our paid pick plans for the 2013-14 NCAA basketball season!