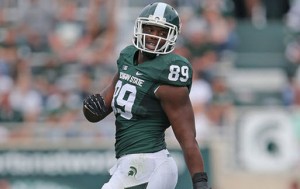 Michigan State is 25-9 in conference road gams under HC Mark Dantonio in the last nine seasons and it won 19 of 22 since 2010. MSU’s fifth year seniors have won 10 of 14 Big Ten road games. The last time the Spartans were 8-0 it lost to Iowa 37-6 and it cost MSU the chance to be in the Rose Bowl.

QB Connor Cook is 31-3 as a starter and has thrown for 1,093 yards the past three games with seven TDs. He has 64 TD passes and is just two short of Kirk Cousins’ career record mark at MSU. The Spartans basically need a 13-0 early December record to find itself into the Final Four, and it finished third and fifth in the final polls the last two seasons.

But it has to come one week at a time, as Dantonio said: “There are a lot of big games between now and then that will affect those final four spots and how people are ranked.” The fact that Michigan State has won 21 of its past 22 Big Ten games should factor large, and Nebraska will be hosting its 347th straight sell out.

Nebraska QB Tommy Armstrong is hopeful to return but sat out the 55-45 loss to Purdue with a lot injury. Prior to that injury he had started 22 straight games, and the loss was the team’s second straight and fourth in its past five.

The Cornhuskers have not lost three straight games since 2008, though. Nebraska is giving up 424.3 yards per game and is the worst FBS team at defending the pass, allowing 315.9 in the air. This could be a game that the Spartans are really able to exploit Nebraska and run the score up high, despite being just 6.5 point favorites.

Purchase our season pick plans to get in on the winnings!

Head to Head
Spartans are 1-4 ATS in their last 5 meetings.