Posted on September 20, 2014 by Brett David Roberts in College Football,Headlines 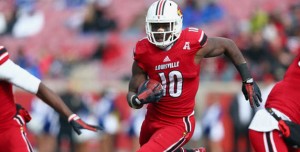 The Louisville Cardinals are 2-1 and have split its two ACC games against Miami (win) and Virginia (loss). In the middle of those two games was a Week 2 stomping of Murray State, 66-21. Lousville is ranked 37th in points scored (39.3) and has a very solid rush game with an average of 178 yards per game.

Senior Dominque Brown is the No. 1 back and he’s rushed for 257 yards on the season with three TDs. Additionally, Brown has caught four receptions for 31 yards. While his 4.4 yards per carry isn’t outstanding, he has carried ball 58 times already, as the workhorse of the offense. No. 2 back freshman L.J. Scott has accounted for 143 yards on 16 attempts, for an average of 8.9 yards per carry. He has one TD on the season, and has caught three passes for 12 yards.

After losing Teddy Bridgewater to the NFL, the Cardinals have turned to sophomore Will Gardner. He’s thrown for 503 yards on a 56 percent completion ratio. But he has kept his turnovers down, throwing just two interceptions and six TDs. The six sacks he has incurred are somewhat trouble some but he has a QB rating of 125.1 this season and has been a legitimate threat, just not to level Bridgewater was.

Florida International Golden Panthers are 1-2 on the season. Excluding a 34-3 drubbing of Wagner, the team has averaged just 13.5 points per game. With the Wagner game included, the team ranks 95th in scoring with 23.7 per game. NCAA football oddsmakers are not giving the Golden Panthers much of a chance, either, setting the line 27-points in favor of the visiting Cardinals.

Freshman QB Alex McGough has taken to the college game quite nicely. He has five TD passes on the year and no interceptions. He has been sacked six times, and he’s only completing 48.2 percent of his passes, but his lack of turnovers renders his QB rating still as a 116.2. He’s also been very effective on the run.

RB Alex Gardner is just 5’9” 192 pounds, so he does it mostly with his speed. Outside of the Wagner game, his stats are less inflated. He managed 46 yards on 12 attempts against a small school in Bethune-Cookman, and he also had just 44 yards in 12 carries against Pitt. Those two games render him with a 45 yard per game average and and 3.75 yards per carry. The hope is that McGlough can be effective against the tougher opponents, but thus far he has struggled against two mediocre squads, so it’s doubtful he can replicate that success over an entire season.

WR Jonnu Smith has impressed. At 6’3” he’s a good red zone target. He caught two receptions for TDs against both Wagner and Pittsburgh, and his 209 yards on 18 receptions gives him an outstanding 11.6 yardd per carry. Again, throwing the Wagner game out, he’s caught nine passes for 82 yards. Also, he managed only 15 and 16 for his longest catch in the games against Bethune-Cookman and Pitt, respectively.