Posted on November 28, 2014 by Brett David Roberts in College Football,Headlines 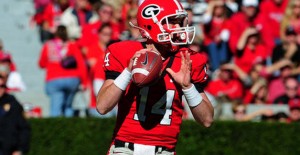 No. 9 overall ranked Georgia hosts No. 16 ranked Georgia Tech this week in an SEC vs ACC in-state rivalry that will be of great importance to both programs as this season winds to its close. The Georgia Tech Yellow Jackets are riding a four-game win streak that included a 28-6 victory over then- No. 19 Clemson last week.

This week, Tech will have a headier challenge in No. 9 Georgia who enters the game as 12.5 point favorites at home according to college football odds listed on Bovada.

In Tech’s victory over Clemson last week, the Yellow Jackets out-scored Clemson 19-3 in the second half after leading just 9-3 at the half. The Yellow Jackets’ defensive effort was suffocating; Clemson converted just 3-of-13 on third down while only mustering 190 total yards (only 59 passing).

Conversely, the Yellow Jackets completed 50 percent of its third downs while nearly doubling Clemson’s yardage (353 total) and amassing 251 yards on the ground, paced by Synjyn Days’ 89 yards on 20 carries. Justin Thomas also broke loose for a 65 yard run in the contest, while throwing 8-of-11 for 102 yards (82.4 passer rating).

The rushing effort has been strong from the Yellow Jackets the entire season. Tech is 4th in the nation in rushing yardage (327.9 per game) and has the 14th highest scoring offense in NCAA D-1 (37.8 points per game). Save a pair of ACC losses to Duke and UNC on Oct 11 & 18, the Yellow Jackets have succceeded in each contest, and will have a long-shot chance at closing the season with a huge victory over No. 3 Florida State next week.

In the interim, Tech will take a look at a tough Georgia Bulldogs team.

Georgia has been on a roll, but mostly against vastly inferior opponents. Since a disappointing 38-20 loss to a poor Florida Gators team, the Bulldogs have gone 3-0, but the only challenge in that trio was the 34-7 victory over then-No. 9 Auburn on Nov. 15. Last week, the 55-9 win over Charleston Southern served as little more than a tune up for this week’s much more vaunted contest.

Georgia is 2-1 this season against AP ranked opponents, with its lone loss coming to then- No. 24 South Carolina on Sept 13. The Bulldogs have been wildly successful save the aforementioned losses, with a plus-22.8 point differential this season. The rush offense has been the bread and butter, with the Bulldogs averaging 260.5 yards per game on the ground this season.

Nick Chubb has amassed 1,152 yards on the season on 161 carries, while Todd Gurley has contributed another 911 yards. Hurley tore his ACL in his left knee in week 12 and is out for the remainder of the season. In his stead, both Sony Mitchel and Brendan Douglas have made heady contributions (328 and 225 yards, respectively). Still, Gurley’s sorely missed as the second-leading TD man.

In the air, the Bulldogs have milked 532 yards out of Chris Conley, who also leads the team with seven TDs and an 18.3 yard per reception average. The pass game isn’t Georgia’s strength, but 200.5 yards per game is more than enough to keep defenses honest enough to promote its potent rush offense.

In the victory over Auburn on Nov. 15, the Bulldogs raked up 289 rushing yards and converted 5-of-13 on third-down, while also maintaining possession for 32 minutes. This game should have a similar theme, but there’s no reason to count the Yellow Jackets out of this contest. While the Bulldogs are double-digit favorites, Georgia Tech is deceptively strong this season.