Posted on September 28, 2012 by Brett David Roberts in College Football,Headlines 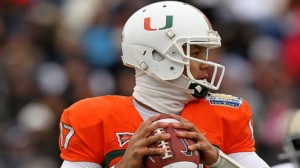 The Hurricanes scored a nice OT upset over Georgia Tech last week. I wrote in my preview for the game, that it was an opportunity for the Hurricanes to gain some respect against an ACC opponent that was on the verge of being ranked. That respect is slow in coming, as Miami got only one vote in the AP poll…but if they keep it up, they may end up at the bottom of the AP top 25.

Stephen Morris has been continually brilliant and Duke Johnson is solidifying himself as one of the best running backs in the ACC.

Morris threw for 436 yards to bring the Hurricanes back from a 36-19 deficit. Johnson ran for 72 yards on 13 carries, but it was his backfield mate Mike James who came up big with the scores, recording three TDs on a season high 89 yards rushing. His three touchdowns were the last three scored of the game, on a 15 yard run with 13:41 remanning in the fourth, a 10 yard reception TD with 27 seconds to go to tie the game (!), and a 25 yard run in OT that sealed the win for the Hurricanes.

The Hurricanes offense will try to maintain steam against an NC State defense that has been strong against the mediocre competition they have faced so far. They didn’t look quite so formidable against Tennessee opening night, and Miami compares more realistically to the Volunteers than the lackluster opponents NC State has played since (UCONN, South Alabama and The Citadel).

Ken Langston of Maddux Sports wrote, quite accurately, that “if you could figure out what NC State was going to do from week to week last year, you are an excellent handicapper. Thus far this season, that dictum hasn’t held quite as true due to their inferior competition. This week will be a bit more enigmatic for handicappers and bettors alike, because these two teams are very closely matched.

Langston cited the varying expectations for NC State this year, citing the fact that experts are predicting anywhere from five to 10 wins. Which team will show up this week? The Wolfpack has enough talent to be very good, but it’s hard to evaluate the true skill level of freshman Shadrach Thornton until he faces some better competition, as his two TDs against the Citadel can only say so much about a RBs skill level.

6’6” senior QB Mike Glennon is about on par with what he did last season, posting a QB rating of 133.8 so far in 2012, compared to 136.4 a year ago. What really has hurt his rating was his four interceptions he threw against Tennessee on opening night. His 50 percent completion rate in the narrow win over UCONN didn’t help either, as he threw 15 of 30 in a game the Wolfpack won by a field goal. He’s also not getting it done when scrambling, and has rushed for positive yardage in only one game so far (and that was just +6 yards vs. Tenn.).