Posted on March 29, 2013 by Brett David Roberts in College Basketball,Headlines 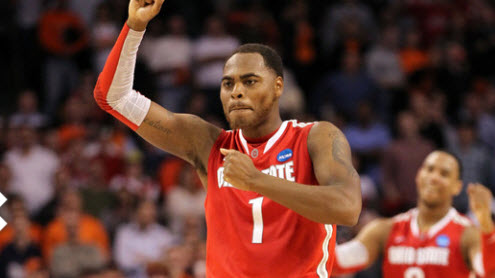 After Wichita State defeated Gonzaga 64-58 in the opening round of the NCAA tournament, the Shockers knew they would inherit the soft and coveted path of the No. 1 seed they defeated. Since that win, the Shockers went on to soundly defeat LaSalle 72-58 and they’ll face the second seeded Ohio State Buckeyes at 7 PM E.T. on Saturday night to determine which squad will win the West Region.

The Buckeyes have won 11 straight games, including their last, a three-point victory over the Arizona Wildcats to advance to the Sweet 16. A late three by LaQuinton Ross pushed the Buckeyes past the Wildcats, and OSU out-scored ‘Zona 39-32 in the second half.

Ross had 17 points off the OSU bench, and forward Deshaun Thomas scored 20 on 7-of-14 shooting, while point guard Aaron Craft had 13 points, five rebounds and five assists.

Wichita State’s strength is interior play. They ranked No. 27 in the nation in rebounds per game (38.4) and they began their season with nine consecutive victories, as they now sit with a 29-8 record.

Their success is somewhat surprising considering they lost six games in the MVC, and it was rough to gauge their tournament prospects since the only ranked squad they faced all year was No. 12 Creighton on Jan. 19 (Wichita won by three).

The Shockers are led by Cleanthony Early and Carl Hall, and they sport a deep 11 man rotation, which features no Shocker seeing more than 28 minutes per game. Early, a 6’8″ junior forward, did not play his first two NCAA seasons, but he’s come on to be a very legitimate forward at the D-1 level. His best game thus far in the tournament was his 21 point, seven rebound performance in the contest against No. 8 Pittsburgh that the Shockers won 73-55.