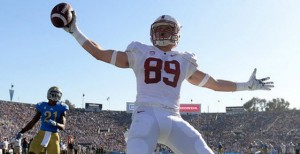 The No. 7 Stanford Cardinal and No. 8 Notre Dame Fighting Irish will collide at 6:30 PM (CT) Saturday night on NBC in what should be one of the most exciting and closely matched games between ranked opponents of this week. Notre Dame is 4-0 after knocking off Wake Forest 56-27 last week, while Stanford is also 4-0 after its Week 4 victory over then- No. 20 Oregon. Notre Dame is favored in this affair as hosts of the game, with an over/under set at 54 points according to NCAA football oddsmakers at 5dimes.

Stanford QB KJ Costello has already thrown for over 1,000 yards on the season at a 64 percent clip with 10 Touchdowns and three interceptions. His top receiver JJ Arcega-Whiteside has 408 yards on 17 catches, averaging 24 yards per reception. No. 2 wide receiver Kaden Smith has been impressive as well, with 18 catches for 258 yards.

Arcega-Whiteside has seven TDs on the year already, while Colby Parkinson has added three on his eight receptions. Stanford has hardly been as successful rushing the ball, averaging just 3.7 yards-per-carry as a team, with No. 1 back Bryce Love averaging just 4.3 per attempt. Love has 254 yards on the season, but no other rusher boasts more than 100, and Costello has been highly unsuccessful in rushing for an average of three yards lost per attempt. He did manage one 12-yard rush, but the Stanford ground game is hardly the reason behind its top-10 AP ranking.

Notre Dame has done it with a much more balanced attack, and with its defense. Despite possessing a No. 70 ranked pass attack and No. 60 ranked rush game, the Fighting Irish still muster 31.5 points per game, which is enough considering it holds its opponents to 19.3 per contest.

Ian Book took over the starting QB role for the Irish last week after Brandon Wimbush continued to struggle. Book was better. He threw 25 of 34 for completion (73.5 percent) in his first start, while amassing 325 yards and two touchdowns with no interceptions. Book also rushed for 43 yards on 10 attempts including three rushing touchdowns.

Clearly, the Irish are in better hands with him starting at QB, or is a one-game sample size against a team like Wake Forest a little insufficient to state that? We will see how he handles a tough team this week as the Irish take on the Cardinal in what might be the closest and most exciting contest of Week 5.