Posted on October 23, 2014 by Brett David Roberts in College Basketball,Headlines 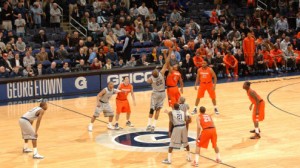 The Villanova Wildcats have reasserted themselves as a power program to be reckoned with just three years after suffering a 19-loss debacle that Jay Wright still has nightmares about. Wright said his Wildcats are “in a good spot” and that the culmination of his efforts over the last three seasons came to fruition last year as the team passed into the third round of the NCAA tournament where it lost to eventual champion UConn 77-65.

Nova returns four starters from last year’s 29-win team and a full 77 percent of its scoring output is back in the fold this year. JayVaughn Pinkston and Darrun Hilliard are both potentially 14-plus point per game scorers and 6’11” Daniel Ochefu was one of the Big East’s two most improved players last year. Ryan Arcidiacono is a solid playmaker who keeps his turnovers down, and with the addition of freshman guard Josh Hart, the Wildcats should continue its winning ways from last season’s title run.

Georgetown, typically known for its strong defense, showed very little of it when its season was on the line against FSU in the NIT. The Hoyas surrendered 101 points to the Seminoles in the second round loss, and the Hoyas hope to reestablish a defense that once held the team as perpetual staples in the NCAA tournament, not the NIT. The Hoyas 8-10 conference record pulled the team down to 7th in the Big East and losing to 11-20 DePaul sealed the Hoyas fate last season, keeping them out of the tournament.

The Hoyas may have the best returning player in the Big East, though, in D’Vauntes Smith-Rivera, a 6’3” junior guard who averaged 17.6 points per game last season while hitting 39 percent from three-point range and 87 percent from the line. Jabril Trawick will help him in the backcourt after averaging nine points per game last season. The backcourt is a bit weak behind those starters. At forward the Hoyas have a lot of experience, but the difference maker will be 6’10” Joshua Smith who averaged 11.5 points per game in his 13 games before bowing out due to academic issues.

Hoya legend Alonzo Mourning’s son Trey will be entering his freshman season at Georgetown, and everyone remember what John Thompson did with Zo. Maybe it’s the beginning of something special again.

The Xavier Muskateers lost its top two scorers from last season and won 21 games last year. Justin Martin transferred to SMU and Xavier has only three scholarship athletes on the roster. The Muskateers will have six freshman on the roster and Indiana transfer Remy Abell. Head coach Chris Mack thinks the team will have better shooting this season, and Abell should be a big part of what the Muskateers are trying to do. He was a reserve on the No. 1 Hoosiers in 2013 and is a staunch defender.

Trevon Bluiett comes in as a highly touted freshman who averaged 35.7 points per game in high school last year, helping Park Tudor High to a third-straight high school title. Offense likely won’t be a problem for the Muskateers, but for the team to make any real waves it’s going to have to teach its young core how to function well defensively as a group.

Matt Stainbrook is back for his senior season after averaging 10 points and seven boards per game last season and being dubbed the “best passing center in the Big East” by Mack.

Last year was a bit strange for Providence, a school picked to finish at the bottom of the pack in the Big East. Despite those expectations the Friars shocked most everyone when the team won its first Big East title in 20 years. Ed Cooley said “It tells Providence that we can be a major factor in the Big East as we move forward, people are not going to just look past us and say it’s an easy win.”

What will be problematic for the Friars, however, is replacing the 40-plus points per game that have left the team. Most importantly, Bryce Cotton and his 21.8 points per game are gone.

LaDontae Henton will have to continue on last season’s late dominance which saw him average 17 points and 12 rebounds per game in the Big East tournament. He’ll be entering his senior season and he easily could have been MVP of the tournament last year. He’s led the team in rebounding for three years straight and he’s experienced enough to help the younger players on this roster continue to make NCAA tournament appearances.

New head coach Brandon Miller didn’t have a lot going for him after replacing Brad Stevens last year. The Bulldogs were making the leap to a major conference after its recent dominance, but he has just one double-digit scorer returning in Roosevelt James, who missed all of last season with a wrist injury.

The Bulldogs finished 10-2 in non-conference games, but fell apart when it hit the Big East section of its schedule. Kellen Dunham will be a featured part of the team after making All Big East second team last season and scoring 16.4 points per game. Butler’s late game play was very suspect last year, and the team lost a lot of close games that easily could have rendered its record far better. Jones was sorely missed last season and with him back in the fold the Bulldogs should have a much better season.