Posted on February 13, 2014 by Brett David Roberts in Headlines,NBA 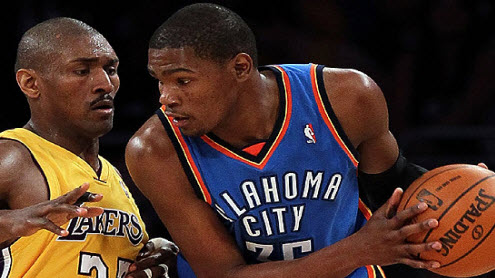 The L.A. Lakers have been a disaster since Kobe Bryant went down after his six-game stint this season. Los Angeles has lost 21 of its past 26 contests, and hosting the Western Conference-leading Thunder isn’t expected to do the team any favors. NBA oddsmakers at Bovada listed the Thunder as 11.5-point favorites over Mike D’Antoni’s Lakers.

To be fair, a big part of what has gone wrong in Los Angeles has been injuries. Mike D’Antoni said “We’ll have three or four guys back then (after the All-Star break), and that will help.”

The Lakers have been without Bryant, Pau Gasol, Nick Young, Jodie Meeks and Xavier Henry—in other words, all the team’s top scorers. Instead of having the youth of Henry and others, the Lakers have been reliant on a decrepit Chris Kaman and Steve Nash for offense. Kaman has delivered, though, scoring 52 points and grabbing 24 rebounds over the past two contests. Nash, though, left Tuesday’s game at halftime due to nerve root irritation and he will not play tonight. That leaves the Lakers very shorthanded, needless to say.

The Thunder, meanwhile, continue to roll without star point guard Russell Westbrook. Kevin Durant is having his best statistical season as a pro and his defense has improved a lot, as well. He’s averaged 35.2 points on 53.3 percent shooting over the past 21 games and he scored 41 against the New York Knicks on Sunday.

Reggie Jackson has spelled Russell Westbrook perfectly, even to the point that the Thunder may re-evaluate whether or not it should keep Westbrook as the starting 1-man. The Thunder are 24-2 when Jackson scores sat least 14 points and he finished with 19 in the win in December over the Lakers.

Jeremy Lamb has also been a valuable reserve for the Thunder, as the team counted on him replacing the production of Kevin Martin last season. Lamb is averaging 10 points per game in 22 minutes a night, and is a good shooter, the perfect complement to the defensive-minded Thabo Sefolosha.