Posted on May 16, 2018 by Brett David Roberts in Headlines,NBA 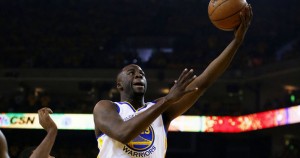 Here at Maddux Sports, we hinted that Kevin Durant would be the difference-maker in this series. After his 37-point Game 1, which the Golden State Warriors won, disagreeing with that notion is difficult at least. Can the Houston Rockets find a way to slow Durant, and never mind that, but is Klay Thompson on the verge of also having the series of his life?

The Warriors switched its starting lineup for Game 1, which required some adjustment on the part of Mike D’Antoni. Known as it’s “Death Lineup” the Warriors began the game with the 6-foot-7 Draymond Green at the 5-spot, sliding Andre Iguodala in at small forward to move Durant to the 4.

That meant Houston instead sent PJ Tucker at Durant, and by and large, Tucker was entirely ineffective at slowing or bothering Durant. The two-time MVP hit 14 of 27 from the field en route to 37 points and a +11 mark for his 40 minutes of play. Thompson also was huge in the game, hitting 9 of 18 from the floor, and he connected on 6 of 15 from three-point range while also coming up with some key defensive plays.

Houston’s backcourt was predictably great, but it just was not enough. Chris Paul and James Harden combined for 64 points, 15 rebounds, and 10 assists while shooting a collective 22 of 41 from the field, but outside of that star tandem, the Rockets got little help. The supporting cast shot just 17 of 44 from the field, and only Eric Gordon reached double-figures.

Gordon scored 15 off the bench on 6 of 13 shooting, but his defense was suspect, and only Gerald Green scored outside of his 15. Green was 2 of 5 from the floor for six points, but picked up four fouls in 17 minutes and was negative-9 for his 17 minutes. Indeed, the Rockets were outclassed badly in the second half, after entering intermission with the score tied 56-56.

Golden State simply came out stronger and more aggressive in the second half, and won this game despite Stephen Curry performing mediocre (at least by his standards). As Curry continues to round into shape, this series should shift more heavily still in Golden State’s favor, and we fully expect the Warriors to both cover the spread and win the game SU. The Dubs may be outclassed in the backcourt, as hinted in the series preview, but its handy advantage with Durant is too much to overcome.

The team was already nearly unbeatable while starting Harrison Barnes at small forward, and upgrading to a league MVP has made the Dubs altogether too unstoppable, simply.