Posted on December 26, 2019 by Brett David Roberts in Headlines,NBA 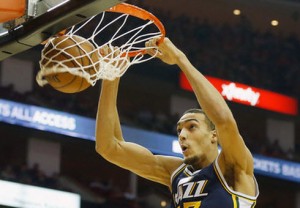 Portland has won six of its last 10 overall. It has knocked off Phoenix, Golden State, Orlando, and most recently, the Minnesota Timberwolves, 113-106 on Saturday night. It lost to the New Orleans Pelicans 94-102, but the Blazers are still seeded No. 8 in the West going into tonight’s game.

Trail Blazers are 1-4 ATS in their last 5 games as a road underdog.

Trail Blazers are 1-4 ATS in their last 5 road games.

The Utah Jazz is 18-11 thus far this season, but it enters Monday night’s game after falling 104-107 to the Miami Heat last game. Utah is 11-3 SU at home where it faces the Blazers tonight.

Things have been slower coming together following the addition of point guard Mike Conley, perhaps than anyone may have expected. The veteran is coming around after a horrid start to this season and now averaging 14 points and 4.6 assists per game. His ball-handling and offense help keep Donovan Mitchell ready to find his scoring spots, and Mitchell is blossoming into a true superstar in his third season.

“Spida” as Mitchell goes by, is averaging 25 points, 4.7 rebounds, and 3.7 assists per game while talking a PER just under 20. Perhaps the biggest surprise for the Jazz has been that Bojan Bogdanovic is far more than a role player, but more of a second star. This changes a lot.

Bogdanovic is averaging 20.8 points per game while shooting 45.6 percent from behind the arc on seven attempts per game. His offense helps the Jazz continue to play its slow, defense-first style of basketball, of course, cued by the defense of Rudy Gobert. Gobert is averaging 14 points and 13.7 boards per game, but his 2.6 blocks/steals help further illustrate his importance to Utah. His rim protection is among the league’s best, and he covers the occasional blunders of Mitchell and the Jazz’s other perimeter defenders nearly flawlessly.

Also, Utah has stepped up its scoring to 107.3 per game this year, and with the way that Utah defends, that should be adequate to put together another very nice season. While few are quick to credit the Jazz in the realms of the elite and true contenders, it arguably is the strongest of the dark horse contenders in either conference.

Jazz are 5-2 ATS in their last 7 when their opponent allows 100 points or more in their previous game.