Posted on November 18, 2017 by Brett David Roberts in Headlines,NBA 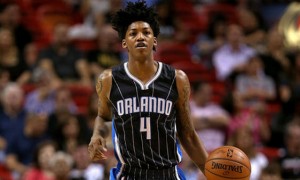 The Orlando Magic had a tough going on its Western Conference road trip. Orlando lost three of four games on its trip, and it now returns home to the Amway Center to host the Utah Jazz.

The Magic are 5-point favorites at home where it has posted a 4-2 mark this season. The over/under is set at 211.5 points according to NBA oddsmakers at bookmaker Bet Online.

The Magic began the season as one of the NBA’s surprise teams of the season, but the trip out West proved difficult. Orlando began its trip by defeating the Phoenix Suns, but it then lost to the Denver Nuggets, Golden State Warriors, and Portland Trail Blazers. It most recently fell 99-94 in Portland as the Blazers went small with a three-guard set and basically ran circles around Orlando.

The Blazers outscored the Magic 27-14 in the second quarter to erase a nine-point first quarter deficit. Evan Fournier had 22 points on 8 of 17 shooting, but Aaron Gordon and Nikola Vucevic were both quiet, combining to shoot 9 of 21 for 23 combined points.

Jonathon Simmons was big off the bench with 16 points on 6 of 11 shooting, three assists, and three rebounds, while posting a +12 for his 26 minutes on the court. Gordon and Simmons can be a great tandem at the 3/4 spots, but Gordon simply was not that engaged against Portland.

The Blazers often used swingman Maurice Harkless on Gordon, and the former Magic man had six points and three rebounds, but he played great defense beyond those marginal statistical contributions. Another former Magic player shined off the bench, as Shabazz Napier played alongside Damian Lillard and C.J. McCollum to score 19 points in 27 minutes. Lillard had 26 points, seven assists, and 11 rebounds. The Magic simply did not get enough from its key players, despite several role players having great nights.

The Magic get 17 points per game or more from Fournier, Gordon, and Vucevic, but it is rare to get consistent production from all three on the same night. Simmons contributes another 15 points per game off the bench, but the Magic still must solve its point guard situation.

Point guard Elfrid Payton had 14 points and five assists in 31 minutes against the Blazers, but he is averaging just nine points per game in his six appearances this season. Shelvin Mack is solid off the bench, but the pace often slows to a crawl with him moving the ball. The Magic are clearly at least a .500 team, but how much better can it be? That hinges on getting consistent strong play from Gordon and better play from the 1-spot. The Magic were abused by Lillard, and that could be a common theme with Payton and Mack both lacking in on-ball defense.

The Jazz is 0-6 on the road this season and it has lost both its Eastern Conference road trip games to open this trip, having fallen to the New York Knicks and Brooklyn Nets. The Jazz is just 6-10 and is without starting center Rudy Gobert. We indicated that would cause serious problems here at Maddux, and that has been accurate. Utah is a team that typically wins on defense, and its defense is built upon the rim protection of its starting center. The Jazz has given up 111 points per game over its past three after maintaining the league’s stingiest defense with Gobert. The identity is simply gone.

The Jazz’ starting frontcourt of Joe Ingles, Jonas Jerebko, and Derrick Favors is about as unimposing as can be. Favors had one blocked shot, but it hardly echoes of the impact Gobert makes around the rim. Beyond that, the Jazz shot 49.4 percent from the floor against Brooklyn but still lost by 11-points. Rodney Hood and Donovan Mitchell now have to produce like superstars in the backcourt, and neither is, not yet. The Jazz has a serious void of scorers on its team, and to keep pace with the high-scoring Magic is unlikely. Expect Orlando to cover the spread and win by close to double-digits, if not pushing the lead into just that.