Posted on February 19, 2014 by Brett David Roberts in Headlines,NBA 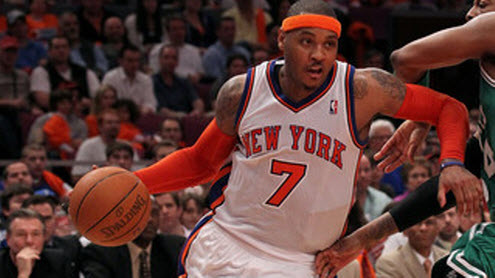 The New Orleans Pelicans are 23-29 and 7.5 games behind Dallas for the 8th spot in the Western Conference. New York, too, is on the outside looking in of the Eastern Conference, with a 20-33 record and trails Charlotte by 3.5 games for the final spot in the East. The Knicks are just 12-18 on the road this season and will travel to face the Pelicans in a game NBA oddsmakers are favoring New Orleans by 3.5-points.

The Knicks have lost its past three contests, and the team fell 98-93 to Memphis last night (Tues). Tim Hardaway Jr. had 23 points in the loss and he’s been looking like one of the steals of the 2013 NBA draft. The son of the former Golden State Warriors and Miami Heat guard Tim Hardaway Sr, the Michigan product has averaged 9.4 points per game in 21 minutes a night as a rookie, and he squared off in an exciting showdown with Dion Waiters in the Rising Stars Game on All-Star weekend.

Carmelo Anthony has been mentioned in trade rumors, and it may be time for James Dolan to pull the plug. Anthony is having another solid statistical season with 27.2 points and 8.7 rebounds per game, but the Knicks have no roster flexibility, have given away most of its draft picks, and there doesn’t seem to be a plan B in place.

New Orleans can say no such pessimistic things. The Pelicans are thrilled with the progress second-year forward Anthony Davis has made, and he appears to be the legitimate franchise cornerstone talent he was projected to be coming out of high school. Davis is averaging 20.5 points and 10.1 rebounds per game, in addition to making a huge impact on the defensive end (1.59 steals, 3.07 blocks). Ryan Anderson has continued the excellence he displayed in Orlando, though he is currently out for two months with a herniated disc in his lower back.

Eric Gordon and Tyreke Evans have been big disappointments, especially considering the massive contracts both harbor. But all things said, the Pelicans have an impressive collection of young talent, headlined by Davis and one-time All-Star Jrue Holiday. The team is headed in the right direction, but will not have a first round pick in the 2014 draft, as it was surrendered to acquire Holiday on draft night in 2013.