Posted on November 16, 2017 by Brett David Roberts in Headlines,NBA 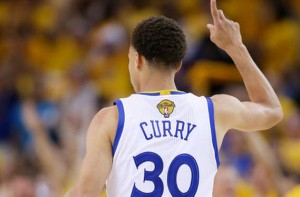 The Conference early-season leaders will square off at 7 PM (CT) on TNT tonight in the first of a double-header, with the Warriors favored by 7-points according to NBA oddsmakers at bookmaker 5dimes.

Golden State has won its past seven games and boasts a 5-1 mark on the road this season. The Celtics similarly have won its past 13 contests and are 6-1 at home. While the Celtics have been rolling, if there is any team to put a thwart to its streak it is the defending champion Warriors. Golden State has gone 2-0 on its Eastern Conference trip thus far after knocking off the Philadelphia 76ers and Orlando Magic.

The Dubs are getting another MVP-caliber season from Stephen Curry, who is totaling 25 points, 4.7 rebounds and 6.7 assists per game with a team-high PER of 28.2. Last season’s Finals MVP Kevin Durant has been coasting somewhat, with 24.8 points and 7.5 rebounds per game. Klay Thompson has rebounded from a down season a year ago to put his scoring average back over 20 points per game while shooting 47.7 percent from three-point range. Durant, too, knocks down a high clip on his triples (.443). The Warriors connected on 13.4 three-pointers per game while shooting 41.2 percent as a team. One cannot ask for greater efficiency.

Despite 17 turnovers per game, the Dubs also rack up 31.3 assists and have a 1.8 Assist: Turnover ratio as a team. The recipe, of course, leads to what the Warriors can boast of: The league’s highest scoring average at 119.6 points per game. Not to belittle the effort of the Warriors’ defense, despite that rapid and torrid pace, the Dubs hold opponents to 107.7 points per game, good for a league-best differential of +11.9. While the three early season losses may sting to some degree, all indications are that Golden State is very much on track to rack up its usual 60-plus wins. Of course, that same statement holds true of its opponent tonight.

The Celtics have been unflappable since losing its first two games of the season and dealing with the loss of Gordon Hayward. Hayward snapped his ankle in the season opener, putting his career as a Celtic and NBA player in serious doubt. But beyond that, the Celtics had the depth and talent to make sure it was not a crippling loss.

Rookie Jayson Tatum has emerged as the starter to replace Hayward, and the rookie has been plenty composed—and played very well. In addition to the Duke forward, the Celtics have been impressed with Cal product Jaylen Brown’s maturity and evolution this season. Brown was a spot-contributor off the bench as a rookie, but alongside Kyrie Irving he has embraced his role as a bigger scorer and playmaker this season.

Brown ranks No. 3 on the C’s in scoring at 15.3 points per game and Irving has more than settled into his new home—having perhaps his finest NBA season from the standpoint of the eye-test alone. Irving is averaging 20.6 points, 5.2 assists and 1.86 steals per game while posting a team-high PER of 22.8. The biggest revelation has been the play of Al Horford, who was slightly disappointing last season, his first year in a Celtics uniform.

Horford has averaged 15.3 points, 8.8 rebounds and 4.5 assists per game while shooting an unfathomable 48.8 percent from three-point range. His evolution into a playmaking stretch-5 has been somewhat surprising, given that Horford had been billed as kind of a “bread and potatoes” player prior to this season.

Now, he is creating for his teammates and dropping 1.5 triples a game while shooting an ultra-efficient 57 percent from the floor. He is a surefire All-Star once again, and in an exclamatory manner this time.

Boston has made good on its big free agent signing from a year ago, even if this last offseason was a bit of a disaster (only in the sense that Hayward was lost, to be clear; the draft night trade of Markelle Fultz for Tatum and another first was smashing, thus far).

While many Boston fans will clamor to know what Hayward could have done as a Celtic, Brad Stevens team has the depth and defense to be serious contenders, and that statement could be made resoundingly if it overcomes the underdog odds and emerges as victors of its 14th straight contest tonight on TNT.