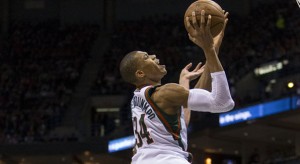 The Boston Celtics have won four straight and nine of its last 10 overall enterings tonight’s matchup in Milwaukee. Boston is 11-8 on the road this season, and it finds itself 8.5-point underdogs in Milwaukee. The over/under is set at 223.5 total points according to NBA oddsmakers at 5dimes.

The Boston Celtics are clearly a better team without Kyrie Irving. Boston is 27-12 and is currently seeded No. 3 in the Eastern Conference.

Milwaukee has been outstanding thus far and has wholly dominated its competition with its 36-6 record thus far. Milwaukee is 21-3 against Eastern Conference opponents.

The Bucks are No. 1 NBA in scoring at 119.4 points per game, and it allows just 106.8 per game. The Bucks have a win differential of +12.6 points. Milwaukee is the league’s best rebounding team, too, averaging 51.8 boards per contest.