Posted on January 7, 2016 by Brett David Roberts in Headlines,NBA 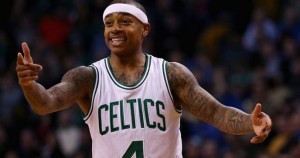 The Chicago Bulls are riding a five-game win streak coming in, benefitting from the extra worldly play of Jimmy Butler. It will host the Boston Celtics in the first of a TNT double header. The Bulls are 6-point favorites in the game with an over/under of 204.5.

Over the Bulls’ streak they have knocked off Toronto Raptors, Indiana Pacers, New York Knicks, Toronto (again) and the Milwaukee Bucks. The last win came 117-106 over the Bucks behind 32 points from Butler. Butler has averaged 31.3 points per game over the Bulls last four games including a 40 point second half against the Raptors on Jan 3. The 2-guard is making his case to be the East’s second-most dominant talent after LeBron James.

It is also making the Bulls into the second-most feared team in the East, at that. Pau Gasol has stepped up his play too, and is averaging 16.7 points and 10.7 rebounds on the year while posting the highest PER of any Bull (22.5). The Bulls still are not getting great player from Derrick Rose and Nikola Mirotic, but with Butler and Gasol producing the way they are fans are beginning to warm more to first-year head coach Fred Holberg.

The Celtics have lost three of its past four games and most recently fell 99-94 to the Detroit Pistons. All five starters reached double figures in the loss, led by point guard Isaiah Thomas’ 22 points on 6 of 20 shooting. The C’s frontcourt shot 17 of 35 from the field for 42 points and 20 rebounds, but Boston shot just 37.4 percent from the floor as a team in the loss.

Thomas leads the Celtics in scoring at 20.9 points per game, and he also has recorded the most assists (6.9) and highest PER (21.5). Avery Bradley has stepped up as a bigger scoring threat this season with 14.7 points per game. He is listed as questionable after missing the last two Celtics games with a hip pointer.

Small forward Jae Crowder makes his calling card on the defensive end, and the Celtics’ frontcourt of Crowder, Amir Johnson and Jared Sullinger has been pretty solid. Sullinger is averaging nine points and nine rebounds per game while posting an above-average PER of 16.3

Boston has been a better team on the road this year than they have been at home, with a 10-6 mark in away games this season. That will prove vital as the Bulls are 15-5 at the United Center and trailing No. 1 Cleveland by just three games in the standings. Chicago is favored in this game and has been hot, and it seems unlikely that the wheels fall off in its own building.