Posted on December 13, 2017 by Brett David Roberts in Headlines,NBA 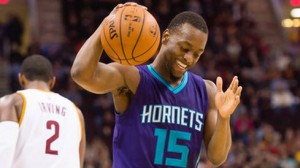 The Charlotte Hornets snapped its three-game skid last outing with an impressive 116-103 win over the Oklahoma City Thunder. Charlotte now travels to face the top team in the Western Conference, the Houston Rockets. Houston is 11.5-point favorites in the game which will air at 8:30 (CT) on ESPN. The over/under is set at 220.5 according to NBA oddsmakers at bookmaker 5dimes.

The Hornets simply are nothing but a mediocre team too heavily dependent upon one-star guard (Kemba Walker). Walker has averaged 22.6 points per game, but second-leading scorer Dwight Howard lingers behind at just under 16 a contest. Jeremy Lamb has improved but should not represent the team’s third-leading scorer necessarily, not if it is to be a team taken seriously as a playoff threat.

Charlotte averages 105.1 points per game, but it really needs to increase that mark, especially since it is giving up 106.7 points per game. While defensive improvement is possible, certainly, with a center like Howard still is manning the paint, the Hornets should have more scoring potential than it has exhibited to this point in the season.

Nicolas Batum began the year injured and is still rounding into shape and finding his way this season. Batum ideally keys the team as its primary playmaker, and he also enables Walker to play off the ball more where the former UConn Husky can be most effective. While Walker certainly thrives in pick and roll sets, he is more dangerous lurking the wings with Batum setting up the offense. All of these observations are supported statistically as Charlotte was a .500-plus team last season when Batum had seven assists or more.

Yet, the team is still trying to find a way to get blood from oranges, and all without using rookie guard Malik Monk all that heavily. It is clear the subtraction of Jeremy Lin two seasons had a much deeper and longer-lasting effect than most realized it would when the talented combo guard departed for Brooklyn. It is hard to say that just that one move is what has rendered Charlotte so absolutely mediocre, but Howard is unlikely to ever return to his days as a 21-point-per-game scorer, and no one outside of Batum can really be said to be underachieving. It is just hard to dream up many scenarios by which the Hornets turn things around this season, and the fall into the lottery should only be perpetuated by the team with the Eastern Conferences’ third-worst mark thus far.

Houston (21-4) has only become a more impressive team since the return of Chris Paul. Paul gives the Rockets essentially a second point guard on the floor, with James Harden still commanding plenty of the offensive workload, both in terms of Beard’s scoring and his creation for his teammates. Mike D’Antoni is one to basically master engineer an offense, and Houston does rank No. 2 in the West in scoring at 115.0 points per game.

Most impressively, however, Houston’s defense has been strong and stringent, allowing just 104.0 per game and helping Houston maintain the league’s best point differential (+11.2). Houston is absolutely rolling, and the only naysayers are questioning the team’s ability to maintain this in the postseason, as D’Antoni’s teams are known to be regular season juggernauts. With a pairing like Paul and Harden, the passing has been crisp and the Rockets are clicking on the strength of its array of three-point shooters, all finding easy looks with Harden attacking and finding so much resistance in the form of double teams. Houston basically has a formula for offensive dominance, and the only real remaining question is whether the team is strong enough on “D” to slow a team like Golden State and contend for the Conference Title.

Harden has been absolutely incredible and is the leading MVP candidate at this point probably. His averages of 32 points, 5.1 rebounds, and 9.5 assists go along with his 1.88 steals per game, as he plays off the defense around him to play passing lanes and get the Rockets out in transition. Harden’s PER is 31.6, nearly double the league average, and Paul has been quietly reinventing himself with 14.8 points and 11.0 assists per game, averaging a double-double for the first time since his days as a New Orleans Hornet so many years ago.

Shooting guard Eric Gordon and power forward Ryan Anderson are the perfect sharpshooters to offset the play of Harden and Paul, while Clint Capela has become a real force at the 5-spot. Capela was said to be “Two years away from being two years away” on draft night, but he has emerged far quicker and even made Dwight Howard expendable to the Rockets two seasons ago. The big man is averaging 13.7 points, 11 rebounds and 1.8 blocks per game in being a real difference maker with Houston’s defensive attack. The potential for the Rockets to walk away from this season as title winners are not unfathomable with the way the role players complement its two main stars.