Posted on January 15, 2016 by Brett David Roberts in Headlines,NBA 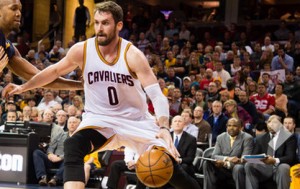 The Houston Rockets seem to be getting it together. Houston has won five straight games going into Friday’s hosting of the Cleveland Cavaliers. The Eastern Conference’s No. 1 team travels to Houston and the Cavs are 1-point favorites in the game which will be the second half of a double-header on ESPN.

The Rockets knocked off the Utah Jazz (twice), Indiana Pacers, Memphis Grizzlies and Minnesota Timberwolves to arrive at 21-19 and the No. 7 spot in the Western Conference picture. It defeated the Wolves last night 107-104 as James Harden scored 27 points on 8 of 22 shooting, while also dishing out 11 assists. Dwight Howard had 15 points, 10 rebounds and two blocks in hitting 5 of his 7 field goal attempts. Howard had seen 10 field goal attempts or more in his three previous games, including a 9 of 15 performance against the Pacers for 21 points, 17 rebounds and three assists.

Getting Howard more involved has been a point of emphasis for Harden and the Rockets, because he had expressed his discontentment with his touches. There was a time in Orlando when Howard attempted over 13 field goals per game, and it stands to reason he can still serve a huge role on the Rockets. Though he is now in his 12th NBA season and 30 years of age, Howard has enough left in the tank that Harden needs to rely on him more heavily. This year, Howard is averaging just 8.6 field goal attempts per game, whereas even last season that figure was 10.3. He is shooting a career high from the floor but his involvement must increase further still.

Harden leads the way with 28 points, six rebounds and seven assists per game, but he is shooting just 41.9 percent from the floor and 33.2 percent from three-point range. The big thing is that Harden gets over 10 free throws per game and knocks those down at an 87 percent clip.

The Rockets are scoring 104.1 points per game this season and Trevor Ariza, Marcus Thornton and Terrence Jones all average double-figures for Houston. The Point guard spot has been a source of disappointment with both Ty Lawson and Patrick Beverley failing to provide consistent shooting or scoring. The Lawson experiment now appears to be a failure and it would hardly be surprising to see the Rockets shop him in the upcoming weeks before the trade deadline.

The Cavs fell 99-95 to the San Antonio Spurs last night, and that is a big part of why it is just one point favorites in tonight’s affair. The Spurs won their 32nd straight game at home, and LeBron James was held largely in check by Spurs super defender Kawhi Leonard.