Posted on January 11, 2016 by Brett David Roberts in Headlines,NBA 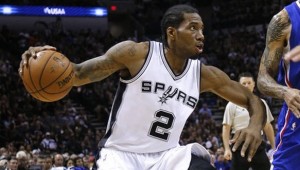 The San Antonio Spurs have ever so quietly been stringing together a nice run at 32-6, but with all eyes on the Golden State Warriors, the Spurs are nearly under the radar. Nevertheless, the Spurs are 10-6 on the road where it will visit the  Brooklyn Nets.

NBA oddsmakers favor the Spurs by 14.5 points and the game will air on NBA League Pass at 6:30 Central.

The Spurs come in on a seven-game win streak and winners of nine of its past 10 contests.

LaMarcus Aldridge has seen his stats dip since becoming a part of the Spurs deep balanced attack. The All-Star is averaging 15.8 points, 8.9 rebounds and 1.34 blocks/steals per game. Alridge has seen a drastic reduction in role since his time in Portland, but he is an effective go-to scorer when the game is on the line, and there may not be a better baseline jumper shooter in all of the league. Rest assured, when games are on the line, Aldridge will get his fair share of touches.

The Spurs go-to star has been Kawhi Leonard, the 2014 Finals MVP. “The Claw” is averaging 20.7 points, 7.1 rebounds and 2.7 assists per game while also coming up with 2.95 blocks/steals per game. Leonard is posting a team-high PER of 27.0 this season. Leonard continues to get better with each passing game, but he goes a little overlooked because the Spurs just do not lend itself to having guys with gaudy stats.

The Spurs have seven rotation players posting above average PERs, and the team averages 103.6 points per game.

The Nets are just 10-27 and on a fast track to the lottery. Joe Johnson could prove an attractive trade chip in February since he is on an expiring $24 million deal that will help either the Nets or another team shed a ton of cap space. Johnson has declined in many ways, but he could still help a number of teams with his 10.9 points, four rebounds and three assists per game.

Johnson still plays 34.7 minutes a night for the Nets, and it seems even likely that the team tries to get some assets for his contract.

Brooklyn also could be shopping Brook Lopez and Thaddeus Young. The team is about to go through a complete rebuild, and it should because nothing is working and Mikhail Prokhorov’s approach of trying to buy a title failed predictably. The Nets are not in a good situation with regard to picks and cap room, but making moves that could better the team are still very much in play.