Posted on March 5, 2018 by Brett David Roberts in Headlines,NBA 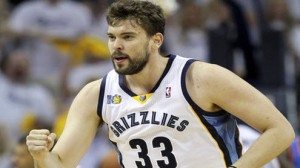 The Memphis Grizzlies are in possession of the league’s worst record at 18-44 on the season. Memphis has lost 13-straight games and is just 5-24 on the road where it faces the San Antonio Spurs as 10.5-point underdogs. The Grizzlies have not won since a 120-109 victory agains the Phoenix Suns on Jan. 29. San Antonio is currently seeded No. 6 in the West and trails No. 3 Portland by just one full game in the tightly-packed standings.

The Spurs will look to move up tonight with a win over the NBA’s worst team.

The Memphis Grizzlies once were known for Grit N Grind, but following the offseason departures of both Zach Randolph and Tony Allen, little of that identity remains. The Grizzlies are a poor offensive team and no longer the defensive force it once was. Memphis ranks No. 20 in defensive rating, giving up 109.6 points per 100-possessions, and it ranks No. 27 in offensive rating, scoring just 104.6 points per-100. The Grizzlies also play the league’s slowest pace (94.4) and rank a paltry No. 25 among the 30 teams in attendance. Things have gotten bad quickly in Memphis.

The Grizzlies still have three very good veterans rotting away on its roster. Tyreke Evans, Marc Gasol and Mike Conley are viable starters and quality players, but only Evans is having an outstanding season. He leads the team in scoring and assists at 19.4 points and 5.1 assists per game, while Conley is tallying just 4.1 assists per game to go with his 17.1 points. Gasol is having something of a down season on this terrible roster, with 17.8 points and 8.5 rebounds in 34 minutes a night. Outside of this trio is where the Grizz’ roster gets dicey.

JaMychal Green, Andrew Harrison and Dillon Brooks round out a weak top-6, and Chandler Parsons is still a costly disappearing act having appeared in just 28 games this season while averaging a mere eight points per game. The Grizzlies may seek to experiment with the multitude of project players on its roster, but Ben McLemore may just be a bust, while Deyonta Davis and Ivan Rabb may be career role players at best. It is just too early to discern for certain, and there are no premier young players on the roster to build around yet. Expect the Grizzlies to gut its roster this offseason.

The San Antonio Spurs have been rolling, but it will be without LaMarcus Aldridge in tonight’s game. Adding to that, is the fact that Kawhi Leonard is still out, whether it is due to a nagging injury or personal reasons—it is not really clear. The Spurs limp in as losers of six of its past seven, but are still in the thick of the Western Conference Playoff chase and seeded No. 6 as of today. That could all change quickly with 10 teams vying for six spots in the West.

The Spurs most recently fell to the red-hot L.A. Lakers last night. Pau Gasol had 19 points, eight assists and 10 rebounds in a near triple-double, while Patty Mills and Dejounte Murray combined for 26 points on a collective 11 of 23 shooting night. The Spurs allowed 116 points to the Lakers though, and its defense has faltered without Leonard over this streak. Davis Betrans will get the start in the front court instead of Aldridge, and he had 11 points and five rebounds in 22 minutes in the loss to L.A.

The Spurs still sport one of the league’s best benches, and it got 48 points from its reserves despite the loss. Rudy Gay hit 5 of 12 en route to 15 points and eight rebounds, and he is still a great utility guy in Pop’s system, able to man either the 3 or the 4 spot. There is no sense pretending this is not still a great veteran team led by a master coach, but it lacks its punch and true contention without Kawhi Leonard available.

“The Klaw’s” future in San Antonio hangs in the balance, but the machine keeps ticking and Popovich will have his crew ready to rumble in the postseason whether it has a premier roster or not. Tony Parker and Manu Ginobili are now fringe bench players, but the pair combined for 18 points and seven assists in the loss to the Lakers, and one figures their clutch play will still be there when the time calls for it. San Antonio is a tough out, no matter what the circumstances surrounding Leonard.