Posted on March 19, 2018 by Brett David Roberts in Headlines,NBA 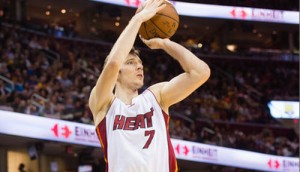 Miami currently resides No. 8 in the Eastern Conference and trails No. 7 Milwaukee by just one half-game game in the standings.

The Heat most recently defeated the L.A. Lakers to snap a two-game losing streak. The Heat have lost three of its last six games, but are still in the chase with a quarter of the season left. Miami is 20-13 at home, where it has won its past four games.

Offensively, the Heat get it done with one of the most balanced offensive attacks in the league. Team-leading scorer Goran Dragic averages ‘only’ 17.3 points per game, but Miami boasts a league-best eight players who average 10 points per game or more. The depth the Heat have has mitigated the effects of a somewhat disappointing season from Dion Waiters, who is averaging just 14.3 points in 25 minutes a night.

Swingman Josh Richardson, combo guard Tyler Johnson, sharpshooter Wayne Ellington, stretch-5 Kelly Olynyk and versatile forward James Johnson all are a part of that double-figure-averaging core, and the team has fit together nicely with great chemistry, which has to in part be credited to the deft coaching of one of the league’s best, Erik Spoelstra.

Miami has several lockdown defenders, and Johnson’s ability to swing on rotations and come up with blocks and steals can hardly be ignored. Even if Justise Winslow is failing to become an adequate offensive threat (just six points per game), his defense has been paramount in the reasons the Heat are able to control the league’s best perimeter scorers.

As Miami continues to gel together, its defense will be what puts it over the top if it is to be successful in advancing to the second round of the 2018 playoffs.

The Denver Nuggets have won five of its last 10 games but are just 11-22 on the road this season. Denver ultimately will face a team with that homeport disadvantage, in the first round, so that does not bode well if the Nuggets cannot find a way to win away from the Pepsi Center in Denver (where it has gone 24-9, conversely).

Denver is a team that many have suggested need a point guard, but the Nuggets rank No. 6 in offensive rating in the NBA, and they get it done through the sharp (and sometimes wizardly) passing of center Nikola Jokic. Jokic leads the Nuggets in assists per game with 5.5, which ultimately reduces the playmaking load of Denver’s bevy of shooting guards. The team really has no true point guard on its roster, though

The Nuggets as a team post 24.1 assists per game with 14.7 turnovers per night, so to criticize the team’s success on the base of its offense would be incorrect.
Defensively is where the Nuggets need the most improvement.

Denver ranks just No. 21 in defensive rating and Jokic is part of the issue there, strangely. While the center is a demon with the ball in his hands, he is slowly rotating and the Nuggets seem to prefer to almost never use Kenneth Faried, who is a defensive game changer at times. Denver has some tradeable pieces, and Mason
Plumlee leaves plenty to be desired defensively, too.

Even so, the Nuggets are a high scoring team that can play with the league’s dominant teams and steal occasional wins, it is just probably in need of a better secondary playmaker to play with Jokic—and also probably a defensive forward who can “quarterback” its defense to call it switches and better the defensive communication.