Posted on November 12, 2017 by Brett David Roberts in Headlines,NBA 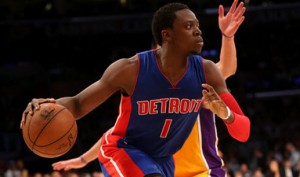 At 9-3 thus far, the Detroit Pistons have been one of the surprise teams of the 2017-18 season. Detroit has won its past four contests and will look to extend that streak to five as it hosts the visiting Miami Heat at 3 PM (Central) Sunday on NBA League Pass.

Early odds show the Pistons as 3.5-point favorites in the game, and the Miami Heat are 6-6 with a 3-3 mark on the road this season.

Detroit’s offense has been perhaps far better than expected, and a revolution in the game of Andre Drummond has plenty to do with it. Drummond has turned into a passing center, exhibiting an ability to set the table for his teammates as Detroit averages 106.1 points per game this season.

Drummond is averaging 3.2 assists per game, a career high, and the Pistons average 22.2 assists per game while maintaining a 1.6 Assist to turnover ratio as a team. Tobias Harris has stepped into the role of primary scorer with a 19.7 point per game average, but new addition Avery Bradley has gelled well as a second option. Bradley came to the Pistons via the Boston Celtics, where he spent his entire career before this season. He is averaging 16.4 points and 1.5 steals per game.

Point guard Reggie Jackson, oft the discussion of trade rumors, has been having a good year for himself too – 16.3 points, 6.3 assists and 1.17 steals per game to his credit. His backup Ish Smith has been effective too with nine points and four assists in just 19 minutes a night. The Pistons are still hoping to get more offensively from Stanley Johnson whose 8.5 points per game leave some to be desired, but his defense has been superb.

Detroit’s lone question mark may be its lack of depth, but Langston Galloway and Anthony Tolliver are both good role players when properly utilized. Drummond is seeing 33.2 minutes per game, leaving precious little for Boban Marjanovic who has appeared in just two games this season. The Pistons eventually will need to cultivate some sense of depth, but at the moment it is cruising along with a .750 win percentage, substantially better than analysts and Vegas futures oddsmakers alike thought it would be. Harris and Drummond have been very solid as a tandem, and Detroit’s chemistry is a factor few counted on being this on-point.

The Miami Heat, meanwhile, have been something of a disappointment. The team finished 41-41 a year ago, and most expected Erik Spoelstra’s club to build on that successful season, perhaps most importantly the second-half thereof, when the Heat were the NBA’s most successful team. Instead, mediocrity has been the result.

Miami has, however, won its past two games, with wins over the Phoenix Suns and Utah Jazz. Miami held Utah to just 74 points, a struggling offense that Hassan Whiteside had no trouble limiting to close to nothing. Whiteside will contend for the Defensive Player of the Year award, with his 1.86 blocks and 1.43 steals per game. He is a game changer, even if it appears as though he is “playing for stats” at times.

Moreover, the Heat are still trying to figure out how to jumpstart Justise Winslow offensively. His defense makes him a viable play, and he is seeing 24 minutes a night, but he produces close to nothing offensively with just 6.8 points per game on 44.3 percent shooting. Winslow came as a one-and-done from Duke, but he has failed to cultivate an offensive game that still has plenty of potential due to his athleticism and strength. The Heat sure could use it, averaging 101.8 points per game this season, which is not enough given the NBA’s penchant towards higher scoring games.