Posted on February 8, 2018 by Brett David Roberts in Headlines,NBA 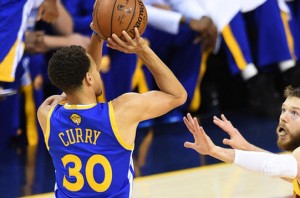 The Dallas Mavericks have lost eight of its past 10 and are just 7-19 on the road as it travels to the league’s toughest venue to face the Golden State Warriors at Oracle Arena.

The Warriors are 19-7 at home this season and perched atop the Western Conference with its 41-13 overall mark. As the Dubs fine tune for another title run, it enters the game as 14-point favorites over the cellar-dwelling Mavericks in a game that will air at 9:30 PM (CT) on NBA League Pass.

Dallas (17-37), is out of realistic contention for the 2018 playoffs, has several reasons to be excited about the progress of what has to be called one of the stranger rebuilds in recent history. While still clinging to what is left of Dirk Nowitzki’s career, the Mavs are nevertheless in something of a tank mode, bent on developing their young talents and positioning themselves for another high pick in the 2018 draft. And that is not all bad. The No. 8 overall pick from the 2017 draft has thus far panned out brilliantly for Dallas, as Dennis Smith Jr. is becoming a household name on a horrible team, which is something of a task in and of itself.

Smith has only been getting more aggressive and better as his rookie season has worn on. Over the Mavericks last five games (four of which were losses), he has averaged 13.6 points, 6.4 assists and 4.0 rebounds while shooting just 29 percent from the floor. His three-point stroke still leaves some room for improvement at just 31.6 percent on the season, but what he lacks in marksmanship he makes up for with extra-worldly athleticism. Over the last five games he has connected on just 4 of 23 from behind the arc.

Shooting struggles aside, Smith’s highlights should keep him on everyone’s radar until the Mavericks build a team around him, but in the meantime, it is difficult to ignore what he is doing already. Smith had 12 points and five assists in the 106-99 victory over Sacramento last outing on Feb. 3, and while outside of swingman Harrison Barnes, not much surrounds him, he does look to have the makings of a true superstar to cede Nowitzki after he finally decides to hang it up.

Dirk still has started all 53 games this season, but he is just playing 25 minutes a night and averaging a very humble 12 points and five rebounds per game. Perhaps the most telling part of his decline, however, has not been the reduction in minutes and usage, but the fact Nowitzki is shooting just 46 percent from the field and attempting just under 10 shots per game. While his guile and skill should enable him to remain at least this effective a little longer, there is no delusional Mavericks fan that is waiting nor expecting him to return to the MVP-caliber play by which his career became known for.

Nevertheless, Barnes (18.4 points per game) and Smith should keep Dallas relevant once Dirk does retire, and the Mavericks may ultimately look for a frontcourt replacement this year in the NBA Draft. It is a rebuild certainly that has more promise than others around the league, despite the fact it is hard to just call it a rebuild while rostering a Hall of Fame talent, still. The L.A. Lakers just rebuilt that way, however, so to say it is entirely uncharted ground would be a bit inaccurate, too.

The Warriors have lost three of its last four games, including a 125-105 pounding at the hands of Russell Westbrook and the Thunder last outing. It might be early to sound any alarms, but the Dubs need to get back on track tonight and Dallas is just the team to do it against.

Though the Dubs have won just one of those past four games, In the win over Sacramento, Golden State got some big play from its primary three scorers: Kevin Durant had 33 points on 12 of 17 shooting, and Klay Thompson and Stephen Curry combined to shoot 15 of 29 for another 43 points. The Warriors shot 55 percent from the floor in the game and connected on 51 percent of its triples (17 of 33). Meanwhile, it held Sacramento to 44 percent shooting and Golden State won big despite 25 (!) turnovers in the game.

The Warriors did have 25 assists to offset those turnovers, but it was a bit of a black mark on an otherwise dominant win. Perhaps the turnovers were a sign of things to come, however, considering GSW lost its next two following that predictable blowout of Sactown.

Golden State could get only richer this offseason with news breaking that LeBron James is possibly interested in joining its roster. In the meantime, Kevin Durant is carrying it just fine.

Durant has averaged 25.3 points, 6.4 assists and 6.1 rebounds over his last 10 games and the Warriors continue to steamroll opponents most nights. It is tough to imagine this roster getting that much better with James, but of course, it would. In the era of the super team, perhaps nothing should surprise us, but it stands to reason that Golden State would have to part with some of its existing brilliant chemistry to add a super-max contract like James would command.