Posted on January 17, 2014 by Brett David Roberts in Headlines,NBA 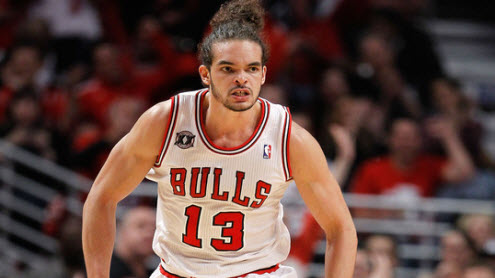 There is no tank in Bull, according to Joakim Noah, who called out Chicago Bulls fans wanting the team to tank for a better chance at one of the studs in the 2014 draft. Noah has backed up that assertion as the Bulls have won six of its past seven games to improve to 18-19 on the season. With or without Derrick Rose, the Bulls are still a strong defensive team with an excellent coach.

The Bulls defeated Orlando 128-125 on Wed night and travel to face the Washington Wizards tonight in a game NBA oddsmakers are favoring the Wizards by five points.

Washington is coming off an impressive showing against the two-time defending champion Miami Heat. The Wizards soundly defeated LeBron James and company at home 114-97 and John Wall had 25 points in the victory.

Wall has drawn a lot of criticism for failing to develop into an elite player, but the Wizards aren’t looking down at his 19.7 points and 8.6 assists per game. Wall’s PER of 20.0 also ranks high. The problem for Wall has always been a lack of jumper and a lack of support from teammates.

The Wiz hoped to remedy some of that by bringing in one of the better offensive pick and roll centers in Marcin Gortat, and he’s averaging 11.9 points and 8.6 rebounds per game. Over his last 10 contests, Gortat has struggled offensively hitting just 47 percent from the floor, and it won’t help tonight that the Polish Hammer is going to face Joakim Noah, one of the best defensive centers in the business.

The Wizards have been an efficient team offensively, ranking 9th in the league in assists per game. But the team still averages just 98.4 points per game and allows more than that, 99.2.

In the East, the Wizards and Bulls can both be as good as 3rd by season’s end, given the weak play all around, but neither team may be doing itself any long-term favors by missing out on a potential lottery pick in this year’s draft. Noah isn’t interested, and no player really wants to tank a season. Wall and the Wiz will seek its third straight victory with a chance to build some real momentum with Detroit, Philly and Boston all next to come on the schedule.