Posted on July 3, 2010July 3, 2010 by Andrew Stevens in Headlines,Sports Handicapping 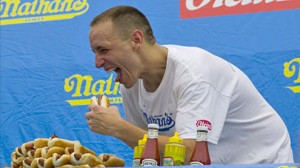 Many of us will celebrate independence from Great Britain Sunday with a picnic, fireworks, and hot dogs. Luckily, we won’t have to chow down 60+ dogs like the participants of Nathan’s Annual Hot Dog Eating Contest.

Legend has it that the contest originated on Jul 4, 1916 when four immigrants wanted to figure out who was more patriotic. They decided to settle the argument by competing in a hot dog eating contest at Nathan’s Famous stand on Coney Island. The inaugural winner was James Mullen, who downed 13 franks.

Little did Mullen know that 90 years later Japanese Takeru Kobayashi would become the first contestant to finish over 50 hot dogs and win his sixth title in a row. Mullen probably also didn’t expect to start an annual event that is now broadcast on national television.

Kobayashi, who won from 2001 to 2006 and looked unbeatable in the process, found his match in Joey Chestnut. The American finished runner-up in 2006 and has won the last three contests. He was the first person to break the magical mark of 60 hot dogs, when he finished 66 franks and buns in 2007.

The rules were changed to a ten minute time limit in 2008, but Chestnut has elevated his game to a new level. He finished 59 dogs in 2008, and set new world and U.S. records when he downed 68 wieners in only ten minutes last year.

It looks like Chestnut has this year’s contest bagged already, as Kobayashi is not scheduled to compete due to a contract dispute. Chestnut appeared on ESPN this week, saying that he has broken his record in practice and that he is looking to set a new world record again this year. With Kobayashi missing and no one pushing the American, this will probably harder to accomplish than with Kobayashi in the field.

5Dimes offers a variety of odds depending on whether Kobayashi shows up or not.

They have the winning score at 70.5 if both Chestnut and Kobayashi compete. I think this is definitely feasible and if Kobayashi challenges the American, I think we could even see both contestants go over that mark. Bet the over at +115, if Kobayashi takes part in the competition.

5Dimes offers the winning score at 68.5 HDB (hot dogs and buns) should Chestnut compete and Kobayashi sit out. While it will be tougher for Chestnut to finish that many franks without someone pushing him, he has said that he has broken his record in practice.

He will use the record as his motivation and I think he will break 70 either way. Bet on the winner to eat more than 68.5 hot dogs if Kobayashi doesn’t compete.

“Eater X”, Tim Janus will once again be one of the more colorful competitors in the contest. In 2006, he assumed the fictional persona of a field hockey player named Helen Haggerty. In 2007, he carried a sign that read “Hermione dies”, which upset many Harry Potter fans and led to the ban of signs at the contest.

Janus finished third in 2008 – this time using facepaint to make his appearance more colorful – with 42 hot dogs. He chowed down 53 HDB last year and finished in fourth place.

5Dimes offers a spread for the head-to-head matchup between Eater X and Chestnut. Janus is the 15.5 dog – uh – dog in the matchup. Bet on Janus +15.5 at -170, especially if Kobayashi doesn’t show up.

Janus improved his total by 11 from 2008 to 2009, and should be able to improve more. If Chestnut has no one pushing him, I see him finishing right around 70. In that case Janus would have to eat only two more dogs than last year to cover.