The Rockies ace may continue his quest to 30 wins this season against a home team that’s struggling at the plate. 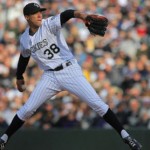 Colorado avoided being swept in its first series since the All-Star break, with a 1-0 victory over the Cincinnati Reds at the Great American Ball Park.  It was the pitching staff’s 10th shutout of the season, which is strange for a club that had never talled more than eight in a year.  Sunday’s result still didn’t cure the Rockies offensive woes on the road, as the team has the second-worst road average (.231) in the Majors behind only the Toronto Blue Jays.  In fact, the team has failed to score more than three runs in three straight games for just the fourth time this season.  Colorado is 5-1 in its last six games as a road favorite, with the team being a perfect 5-0 in that spot with tonight’s starter on the hill.

Rockies starting pitcher Ubaldo Jimenez is a sparkling 15-1 with a 2.20 ERA in 18 starts this season and is coming off a two-inning start for the National League in the All-Star Game.  The right-hander is 9-1 with a brilliant 1.23 ERA in 10 road starts, allowing just 42 hits over 73.1 innings.  After posting 0.79 and 0.78 ERAs in the months of April and May respectively, Jimenez has fallen off to compile a 4.41 ERA and 5.14 ERA in June and July.  In two career starts versus the Marlins, he stands at an even 1-1 and 1.80 ERA.  He set a franchise record by grabbing his ninth consecutive win last time out, allowing just a single run in eight innings in a 4-2 home victory over the Cardinals.

Florida also picked up a 1-0 shutout victory on Sunday afternoon, blanking the Washington Nationals at Sun Life Stadium.  “For whatever reasons, it’s tough to score runs right now,” second baseman Dan Uggla said.  A big reason for these offensive struggles has been focused upon All-Star shortstop Hanley Ramirez, who has failed to drive in a run or collect an extra-base hit in nine consecutive games.  The pitching staff hasn’t been a problem since the break, tossing 27 scoreless innings to shutout the Nationals in all three games of their recent series.  The Marlins are likely not to breakout offensively tonight, as they have tallied a 28-37 record against right-handed starters this season.

Marlins starting pitcher Anibal Sanchez is 7-6 with a 3.66 ERA in 17 starts this season, but the team has dropped three straight with him on the hill.  His last two starts have been especially rocky, allowing 10 runs (nine earned) and 16 hits in 10 frames.  He is 3-2 with a 2.50 ERA in eight home starts, surrendering just a single home run in 50.1 innings, as opponents are hitting .231 against him at Sun Life Stadium.  Sanchez proved victorious in his only career start against the Rockies on July 31, 2008, allowing two runs on six hits and four strikeouts in 5.2 innings.

Bettors may turn aggressive in playing the road team in this contest, as the Rockies are 14-6 in their last 20 road games versus a team with a losing home record.  This fits nicely in knowing the Marlins are 0-4 in their last four games as a home underdog of +110 to +150.  It’s also important to state that the club is 0-4 in Sanchez’s last four starts as a home dog.