The Braves handed the Dodgers their worst defeat in three years on Sunday afternoon and now look to capture the series at Turner Field. 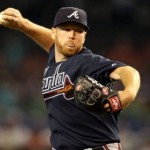 Los Angeles suffered a 13-1 blowout defeat in Sunday’s contest against the Braves at Turner Field and have lost 13 of 16 on the road.  “We had opportunities, couldn’t get the big hit, nothing you can do about it,” manager Joe Torre said.  The loss was the largest margin of defeat this year, as the team is without regulars Casey Blake, Jamey Carroll, Manny Ramirez, Rafael Furcal and Russell Martin.  The three runs the Dodgers have scored in the last two games have come on outs, as they are 0-for-20 with runners in scoring position in the series.  Los Angeles has posted a 6-5 record after allowing 10 or more runs in a game this season (-90) and are 9-17 in this situation the last three years (-1,340).  The club is a disappointing 4-10 as a road underdog of +125 to +150 and the total is 5-9 O/U in those contests.  As this series ends, Los Angeles is assured of returning home without consecutive second-half road wins, as they last accomplished this feat on July 3-4 in Arizona.

Dodgers starting pitcher Chad Billingsley is 9-7 with a 3.78 ERA in 22 starts this season, but the team has dropped three straight games with him on the hill.  Over that span, the offense has managed to score just a single run, as he has allowed five runs and 14 hits over 18.2 innings.  The right-hander is 5-3 with a 2.96 ERA in 12 road starts this year, surrendering just three home runs in 67 frames.  He has made 24 career starts in August, posting a 9-8 mark and 2.94 ERA.  In seven career appearances (five starts) against the Braves, Billingsley has posted a 1-3 record and 3.82 ERA, including a 9-3 loss at Dodger Stadium on June 5.

Braves starting pitcher Tommy Hanson is an even 8-8 with a 3.51 ERA in 24 starts this season and the team finally broke a five-game losing streak with him on the hill last time out.  In that start, he allowed just a single unearned run and two hits over seven innings of work in a 8-2 road win over the Astros.  The right-hander is an even 4-4 with a 4.04 ERA in 12 home starts, collecting 63 strikeouts in 69 frames.  In three starts this month, he has yet to pick up a win despite posting a 0.84 ERA, giving up just 10 hits in 21.1 innings.  Hanson has made two lifetime starts against the Dodgers, compiling an even 1-1 record and 4.50 ERA, including a 9-3 road win at Los Angeles on June 5.

Bettors will acknowledge that both pitchers are coming in with great form, but there’s one area that stands out.  The Dodgers are 0-5 in Billingsley’s last five starts versus the NL East, while the Braves have gone 4-1 in Hanson’s last five outings against the NL West.