The Athletics are the best home underdog on Monday’s card in a series opening game against the Yankees. 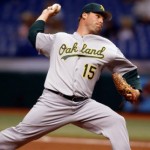 Yankees starting pitcher Javier Vazquez is 6-7 with a 5.11 ERA in 15 games (14 starts) this season.  He will be making his 400th career start tonight, becoming the 120th pitcher in Major League history to reach that mark.  He is 3-4 with a 5.76 ERA in eight road starts this season, allowing seven home runs in 45.1 innings.  In eight career starts versus the Athletics, he stands at an even 3-3 wit ha 4.99 ERA.  His third start of the season was against Oakland back on April 20, picking up a 7-3 win, allowing three earned runs and six hits over 5.1 innings.

Oakland comes back to town after a successful 4-2 road trip against Baltimore and Cleveland, looking to capture its fourth straight victory at home.  “It definitely gives us confidence heading into this week for the Yankees series,” third baseman Adam Rosales said.  The team has now won seven of their last eight games following a stretch in which they lost 10 of 12.  The Athletics are 12-15 in the first game of the series and I’m imagining they’d rather have it played during the day than at night.  The club brings a dismal 22-32 nighttime record into the contest (-1,070) and is an even 20-20 following a win (-130).

Athletics starting pitcher Ben Sheets is 3-7 with a 4.98 ERA in 17 starts this season, with his team losing five of his last six starts.  He picked up a 9-6 defeat in Baltimore last time out, surrendering four runs (three earned) and seven hits over six innings of work.  Despite his inability to produce victories, the right-hander has managed to last at least six innings in 14 of 17 outings.  Sheets has been solid at home, producing a winning 3-2 mark and 3.19 ERA in eight starts.  In two lifetime outings against the Yankees, he is an even 1-1 with a 1.38 ERA, allowing just six hits over 13 innings.

Bettors have a golden opportunity in playing a slight home underdog in this contest, as the Athletics are 24-16 at home this season (+730).  This is strengthened in finding the Yankees 1-4 in Vazquez’s last five starts as a road favorite of -110 to -150.