Posted on August 28, 2012 by Jeff Mattinger in Baseball,Headlines

The Tampa Bay Rays (70-58) and Texas Rangers (76-52) will continue an important American League series on Tuesday night at the Rangers Ballpark in Arlington, with the first pitch scheduled for 8:05 ET 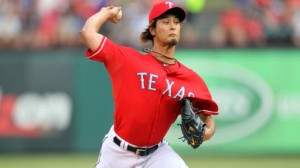 Tampa Bay dropped its third straight game in suffering a 6-5 setback to Texas on Monday night, as the club also fell out of the top spot in the AL Wild Card race because of the result.  “We’ll get it back,” commented Rays manager Joe Maddon.  The Rays have actually lost nine of their last 10 one-run games, while going 6-18 in that situation since May 28.  The club came into last night’s series opener with a 16-7 record in August, which was the best mark in the majors.  Tampa Bay is 21-12 versus AL West opponents this year.

Rays starting pitcher James Shields (12-7, 4.01 ERA) has led the club to five consecutive victories, including a 5-1 home win over the Kansas City Royals last time out, allowing three runs and five hits over 7.2 innings.  The right-hander is 7-3 with a 3.98 ERA in 13 road outings, surrendering 12 home runs in 86 combined frames.  In nine career starts versus the Rangers, Shields has compiled a solid 6-2 record and 3.32 ERA, including a 4-0 mark and 1.80 ERA in his last four outings in the series.

Texas continues to ride third baseman Adrian Beltre at the plate, as he collected four RBIs in last night’s victory.  The Rangers are still 5.5 games ahead of the Oakland Athletics in the AL West standings, while holding a commanding 10-game lead over the third-place Los Angeles Angels.  The club came into last night with the best home winning percentage (.631) in the Junior Circuit, while possessing a 22-13 mark against AL East teams.

Rangers starting pitcher Yu Darvish (12-9, 4.51 ERA) has watched the club alternate wins and losses over his last seven outings, coming off a 3-2 road loss to the Toronto Blue Jays, giving up three runs and three hits in seven frames.  The right-hander is 8-2 with a 4.50 ERA in 11 home outings, issuing 34 walks and striking out 85 batters in 72 frames.  Darvish will be facing the Rays for the first time in his career.

Sports bettors will likely play the total in this contest, as the UNDER is 11-3 in the Rays last 14 road games with a number of 9 to 10.5