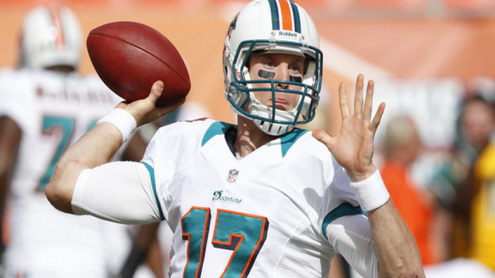 The Miami Dolphins became more known for the off-field bullying scandal than the team’s play. The two players in question were both starters, and the team collapsed late in the season, failing to make the playoffs. Offensive coordinator Mike Sherman lost his job for the offensive deterioration.

Joe Philbin is just 15-17 in his two seasons in Miami and is definitely on the hot seat this season. The Dolphins simply have too much talent on both ends of the ball for another whiff at the playoffs.

The strange controversies of last season should be behind them, and Ryan Tannehill is continuing to grow as a quarterback. The offensive line is being completely rebuilt this season, and its development is one of the major questions plaguing the offense.

The Dolphins replace offensive coordinator Sherman with Lazor this season. Lazor developed Nick Foles in an ascent towards being one of the best QBs in the league, and the hope is that Tannehill will undergo a similar evolution. If he doesn’t, the Dolphins are stacking the team around him to no avail, with tons of veterans capable of producing wins.

Tannehill improved a lot in 2013. His completion percentage jumped to 60.4 percent, while throwing for 3,913 yards and 24 TDs. He threw too many interceptions (17) and he was also sacked aplenty (58). His offensive line was largely to blame. Tannehill had some great duels in 2013, winning in Week Two against Andrew Luck and winning over Matt Ryan and Tom Brady as well. He threw for 331 yards in a Week 13 win over the New York Jets.

However, the offense had some lows, including a 7-point game and a shutout.

The two losses in question both happened in Weeks 16 and 17, and ultimately costs the Dolphins a playoff berth. Lazor hopefully will be able to instill some control in Tannehills game so that he doesn’t turn it over so often, nor run into trouble and get sacked. Backup Matt Moore is not a horrible option if Tannehill struggles, as the Dolphins went 6-6 under Moore last season. Third stringer Pat Devlin is not really much of an option.

After Richie Incognito and Jonathan Martin disappeared from the offensive line, the Dolphins running attack went kaput. The RBs last season, Lamar Miller and Daniel Thomas, were both underwhelming. But the Dolphins made a key free agent signing that a lot of people seemed to sleep on.

Knowshon Moreno will surely bring a lot of offense, as he racked up 1,038 rushing yards, 548 receiving yards and 13 total touchdowns last season. He was signed just for this season at a bill of $3 million, by all accounts a huge bargain.

Miller will be the secondary ball carrier most likely, but Thomas will see goal line attempts and short yardage. All three could potentially give the Dolphins a pretty good running attack.

Tannehill doesn’t have the greatest receiving corp. There are no red zone targets and Mike Wallace was a huge disappointment last season, especially since he is signed for $30 million guaranteed. He had 930 yards and five TDs, but the Dolphins have two more seasons of paying him far too much. Brian Hartline is solid, but doesn’t get many looks in the end zone (just four TDs).

Dallas Thomas, Jason Fox, Billy Turner and first-round pick James from Tennessee will all battle for the spot at right tackle. Pouncey is the only returning starter from last season and he made the 2013 Pro Bowl, so he’s worth keeping around. The offensive line has a new coach in John Benton, too, and he’ll have a heady task ahead of himself with so many new faces in Miami.

If this group can’t protect Tannehill better than last year’s miserable group, the Dolphins stand no chance at the postseason.

The Dolphins ran a 4-3 defense last season and finished in the top-10 for points allowed. The team lost a few players (Paul Soliai, Nolan Carroll and Chris Clemons), but the Dolphins are a much more certain bet to excel defensively.

The defensive line is very good. Jared Odrick, Randy Starks and Earl Mitchell all combined for 10 sacks last season, and Cameron Wake is a very dominant pass rusher (8.5 sacks). Olivier Vernon is a superb athlete and had 11.5 sacks. He’s not great at stopping the run, but the Dolphins can find an identity in putting a lot of pressure on QBs. It should be interesting to see if the Dolphins get any return on the No. 3 pick from the 2013 NFL draft, Dion Jordan, as he was barely utilized at all last season.

Miami’s linebackers aren’t its greatest strength, however. The team spent $27 million in the offseason to try to fix that, but whether or not it does remains to be seen. Both of the signings (Ellerbe and Wheeler) were garbage in 2013, so it’s hard to expect much more this go-around. The tandem was slow covering passes and seldom made any game changing plays.

Wheeler had no interceptions and just 0.5 sacks, while missing countless tackles he should have made. Ellerbe racked up the interceptions with two, while getting one sack. Miami’s best chance at a game changer at the position might end up being Koa Misi. Jalani Jenkins is good for the nickel defense and is good for pass coverage, but Jason Trusnik and Johnathan Feeney are special teams fodder.

The secondary has athleticism and talent and the potential to be very good. CB Brent Grimes had four interceptions and a TD after coming back from an injured Achilles, and former Rams and Titans CB Cortland Finnegan will line up with him. Free safety Reshad Jones didn’t impress last year, but is still considered one of the better young safeties in the NFL.

The Dolphins did great with punts last season with Brandon Fields averaging 42.4 yards per punt and having none blocked nor returned for TDs. Marcus Thigpen averaged 22.3 yards per kickoff return, but had no TDs and a long run of 50 yards, while also finishing 34th in punt return average (7.8 yards), with a long of 34 yards and no TDs.

Caleb Sturgis was pretty ineffective with field goals, hitting just 26-of-34 and missing both from beyond 40 yard, and only 3-of-7 from 50-plus. His 38 touchbacks also ranked 15th in the league. Still, the fact that the team did not allow a TD on a kickoff or punt is pretty impressive.

The Dolphins have no excuses whatsoever not to make the postseason in 2014-15. The team was plagued with controversy last year, and that dark cloud has launched itself firmly into the distance. Philbin basically has his last chance as a coach of the Dolphins to prove his weight. It doesn’t help that the Dolphins are division rivals of the Patriots, who are arguably the 3rd best team in the league, and the Bills aren’t sluffs either this season.

The fact that Miami has a top-10 defense and an ever-improving young quarterback is enough not to count them out. Still, the odds to win the division are set at +650 at Bovada, so bettors can temper expectations accordingly, while Dolphins fans clutch their collective fists and hope for a better season from Philbin.