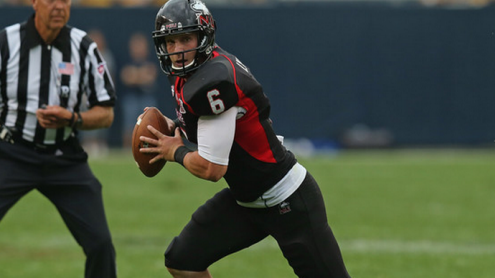 Northern Illinois is hoping to score their 13th consecutive victory away from home, and the Huskies have won 19 straight over Mid-American Conference opponents. However, despite college football oddsmakers setting the line 15.5 points in favor of the visiting Huskies, Central Michigan has fared well against them historically, as the victors of the last three contests dating back to 2005.

Northern Illinois ranks 9th in the nation in rushing yardage per game with 282.7 yards per game. The offense is productive, producing 39.7 points per game (21st best in the nation), and the defense has been solid enough to allow the team to roll out to a 6-0 start. The Huskies have a soft and tame schedule, so the possibility of finishing undefeated has to be a real goal amongst the team.

Jordan Lynch has been a great dual-threat quarterback. He’s thrown for 1,333 yards with a 60.5 percent completion ratio and has 13 throwing TDs to just four interceptions. In addition, he’s rushed for 616 yards on 106 carries and has four rushing touchdowns including a 61-yard breakaway TD. Lynch’s primary ball carrier has had success too. Cameron Stingily has rushed for 656 yards on 119 carries (5.5 yards per carry) with six TDs.

With the success NIU has on the ground it opens it up for receivers Da’Ron Brown and Tommylee Lewis to get some receptions. Brown has 28 on the year including five TDs and Lewis has 40 receptions and two TDs.

Central Michigan is 3-4 on the season but boasts a 2-1 record in the MAC. The Chippewas have been badly out-classed by opponents like Michigan, UNLV and NC State, but the squad has pulled victories both of the last two weeks over Miami of Ohio and Ohio. This week will be far more challenging going against the second nationally ranked opponent it has faced this season.

The Chippewas have struggled to produce yardage all season and rank near the bottom of the nation in points per game with just 18.9. The defense also hasn’t been especially good, allowing 32.7 points per game. College football oddsmakers set the total high in this game, potentially on the anticipation of NIU being able to run up the score against a bad Chippewas defense that surrendered 59 points to Michigan.