The Los Angeles Dodgers (49-44) and New York Mets (47-45) will open up a three-game National League series on Friday night at Citi Field, with the first pitch scheduled for 7:10 ET 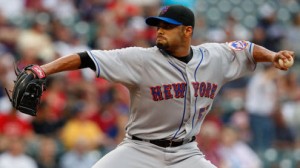 Los Angeles is coming off one of its most exciting wins of the 2012 campaign, capturing a 5-3 walk-off victory over the Philadelphia Phillies on Wednesday afternoon, as All-Star outfielder Matt Kemp provided the big hit.  “We’re going to go on the road and get on fire, baby,” Kemp stated after the game.  The Dodgers have been one of the worst teams in the league since June 15, scoring five or more runs only four times, while going 8-20 over that span.  Los Angeles is 2-4 as a road underdog of +125 to +150, with the “under” going 4-1 in those contests.

Dodgers starting pitcher Aaron Harang (6-5, 3.53 ERA) didn’t factor into the decision of a 7-6 home loss to the San Diego Padres last time out, giving up four runs (three earned) and four hits over seven frames.  The right-hander is 4-3 with a 4.09 ERA in 10 road outings, surrendering just three home runs in 55 frames.  In nine lifetime starts versus the Mets, Harang has tallied a 3-4 record and 6.09 ERA.

New York snapped a season-high six-game losing streak with a 9-5 road win over the Washington Nationals Thursday afternoon, with All-Star third baseman David Wright leading the way, homering twice and finishing with five RBIs.  “Either we stick with it and keep going out there and grinding away, or we fold up shop,” commented Wright about the team’s current standing.  The Mets need to try and find a reliever at the Trade Deadline, as the bullpen ranks 30th in the league in ERA.  New York is 5-3 as a home favorite of -125 to -150, with the “under” going 5-2 in those contests.

Sports bettors will likely back the Mets due to their 5-0 record as a home favorite of -110 to -150, while the Dodgers are 2-6 in series openers.