Posted on June 27, 2011 by Brett David Roberts in Baseball,Headlines 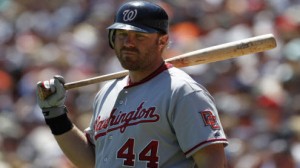 Though being 2 games above .500 is little reason for rejoicing under most circumstances, it suits the Nationals just fine.  They have their chance to win their third straight and move a whopping 3 games above .500, good enough to be respectable, bad enough to be considered hardly a threat by the actual contenders.

The Nats do have a new manager as well:  Davey Johnson.  He’s not young at age 68, but former manager Mike Rizzo feels good about his prospects:

“Davey’s a perfect fit for this job at this particular time,” Rizzo said. “He’s a guy with a track record that’s beyond reproach. He knows the system, he knows the staff, he knows the major league club and he’s a terrific baseball guy and a proven winning manager.”

Davey is not new to the coaching ranks to see the least, and has great experience after managing 14 seasons with the Mets, Reds, and Orioles, not to mention Team USA managing.  He led the Mets to a World Series Title 25 years ago, and while he’s not expected to do that with the Nats this year, there is good reason for hope.  The Nats are currently 8.5 games behind the run away division leader Phillies, but that’s about 7 games closer than they were a few weeks ago, as they have won 13 of their last 15 games.  If they keep it up at that rate (doubtful) then other teams may actually have reason to fear the Nats.

They’ll send a solid pitcher to the mound to defend their cause.  John Lannan, the 26 year old lefty, has been the Nats best pitcher so far and sports a middling 5-5 record with a respectable 3.40 ERA.  Ih his last six starts, however, he has been even more impressive.  He’s 3-0 over that span with an ERA near 1.00 (1.15 for good measure).  Wednesday against the Mariners, he gave up one run and three hits in 5 2/3rds innings work of a 2-1 win.  This is his first career appearance against the Angels.

Last season, Lannan’s WHIP reared up close to 2.00, before he was sent to the minors to work on his stuff.  He seems to have recovered fine from his struggles since he has been good since he got called up last year, as he gave up only 71 Hits and 14 walks in 68 IPs…

The Angels lost to the Dodgers 3-2 on Sunday and finally make their returns to Anaheim today.  They nearly put together a four game winning streak, but Jordan Walden gave up 2 runs in the 9th, blowing a save, and causing the Angels to lose.

The vaunted Ervin Santana will pitch tonight for the Angels, as well.  He’s declined quite a bit since his heyday.  In 2008, he went 16-7 with a 3.49 ERA, but more importantly a 1.16 WHIP.  His velocity on his fastball today is a shadow of what it was before the shoulder problems, but he’s still an effective pitcher and provided the Angels can show him some love with some run support, he should pick up the victory today.

Washington has been very hot, but still find themselves ‘dogs in this one.  Lannan has been as hot as the Nats have, so Washington still stands a great chance to win this one.  The key, of course, will be whether the Angels can manage to put some runs on the board for their former ace.