The Phillies find themselves in a great bounceback spot at Wrigley Field on Friday afternoon. 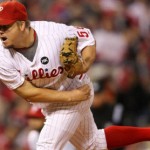 Phillies starting pitcher Joe Blanton is 3-5 with a 6.41 ERA in 13 starts this season (-240), as the club has provided a tremendous amount of offense in four of his last five starts.  In those contests, Philadelphia has scored 44 runs, while the right-hander has allowed 19 runs and 39 hits over 28 innings of work.  He is 1-3 with a 7.68 ERA in six road starts (-240), with opposing hitters combining for a .301 batting average.  Blanton is searching for his first decision against the Cubs, posting a 2.75 ERA in three previous starts.  He stands at 2-3 with a 6.80 ERA in eight daytime starts this season compared to a 1-2 record and 5.81 ERA at night.

Chicago produced a dominating victory in its first game back from the All-Star break, which has been a common theme under head coach Lou Piniella.  The Cubs have posted a 121-95 record after the break with him at the controls.  With Thursday night’s victory, the Cubs hold a 3-2 season series lead over the Phillies, as they look to capture the first winning series against them since 2001.  Playing during the day has normally been a strength for the Cubbies, but the team brings a 21-25 record to the table in 2010 (-1,120).  The Cubs have scored 51 runs in their last seven games, with the total going over in six of those.

Cubs starting pitcher Ted Lilly is 3-8 with a 4.08 ERA in 15 starts this season, but has dropped his last two starts against the Cincinnati Reds and Los Angeles Dodgers.  In those two outings, he has allowed 16 runs (14 earned) and 18 hits in 10.1 innings of work.  The left-hander is 2-4 with a 4.75 ERA in eight home starts, managing to walk just 13 batters while striking out 34.  In five career starts against the Phillies, he is 1-4 with a 6.43 ERA.  Lilly is hoping to tally his first daytime victory, going 0-3 with a 6.08 ERA in six starts under the sun this season.

Bettors will have a definitive interest in playing the underdog in this contest, with no definite edge in the starting pitching matchup.  The Phillies are 5-0 in their last five games versus a left-handed starter, after starting the season 5-10.  It’s been a difficult season for the home team all season, especially at the end of the week with a 0-9 record in their last nine Friday games.