The Giants remained red-hot in returning from the All-Star break, but face a team that often bounces back after a loss. 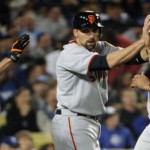 New York started its season-high 11-game road trip by getting shutout in a 2-0 loss to the San Francisco Giants at AT&T Park.  The Mets have lost four of their last five games  and have managed to score just three runs in the four losses.  Despite failing to score a run, the lineup received a boost with the return of outfielder Carlos Beltran, playing his first game since May 20, 2009.  “After being out for so long and going through a very long process, I was happy,” Beltran said.  He went 1-for-4 last night and hit .367 with five RBI in 14 rehabilitation games.  New York still holds a 14-8 series edge against the Giants over the last three years and have won the last four series in the Bay Area since 2006.  The club has compiled a 14-10 record against left-handed starters this season (+420), with the total being 10-12-2 O/U in those games.

Mets starting pitcher Jonathon Niese is 6-3 with a 3.61 ERA in 15 starts this season (+560), with the team dropping his last start after winning six straights games with him on the mound.  The left-hander compiled a perfect 4-0 record and 2.67 ERA in five June starts and has carried it over to the current month.  Niese stands at an even 1-1 with a 2.45 ERA in two July outings, issuing just a single walk while striking out 16 in 14.2 innings.  He has never pitched at AT&T Park and will be making his first career appearance against the Giants.  He is 3-1 with a 4.24 ERA in six games on the road (+20).

San Francisco remained hot in returning from the All-Star break, picking up its eighth win in 10 games.  The club moved its record to 27-28 when playing opposition with a .500-or-better mark this season, while being 21-13 against opponents under .500.  The victory also snapped a five-game home losing streak for the Giants, but the team remains a solid 26-17 at AT&T Park (+360).  Bettors need to be aware of the Giants’ bullpen finishing the first half of the season with a 1.96 home ERA, which led to last night’s game going under the total and the team being 16-23 O/U overall at home.

Giants starting pitcher Barry Zito is 7-4 with a 3.76 ERA in 18 starts this season, but is looking for his first victory since June 12.  Over his last five starts, the left-hander has allowed 18 runs and 32 hits over 28 innings.  He failed to pick up a win in the Giants 9-3 road victory over the Brewers last time out due to lasting just 4.2 innings.  Zito possesses a solid 5-1 record and 2.83 ERA in nine home games this season.  In five career starts versus the Mets, he brings an even 2-2 record and 4.28 ERA.  He has tossed just two quality starts in those outings, but none have come in the last three games.