The Giants are falling fast in the NL West standings and are hoping their ace can stop the slide. 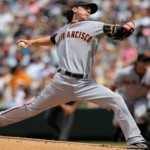 San Francisco is praying that its two-time Cy Young Award winner can jumpstart the club, as the team has lost a season-high six games.  The bullpen also needs an extended start by the rotation, as the unit has pitched 40.1 of the club’s last 96 innings.  “We can use an extra arm right now,” manager Bruce Bochy said.  The Giants have had all kinds of trouble against division opponents, producing a 8-18 versus the NL West (-1,400).  Tonight will be San Francisco’s second game of an 11-game, three-city trip, as the team has posted a 15-21 mark away from AT&T Park (-720).  The lineup has scored three runs-or-fewer in 36 of its 78 games this year, but there are still seven other teams in that National League that have had more games in the category.

Giants starting pitcher Tim Lincecum is 8-3 with a 3.13 ERA in 16 starts this season, but is coming off a less-than-stellar outing against the Boston Red Sox.  The right-hander lasted just three innings in allowing four earned runs and five hits while walking three batters, marking his shortest appearance of the year.  He will be making his 13th career start against the Rockies and the second of the season, going 5-4 with a 3.62 ERA in those previous efforts.  Lincecum stands at a perfect 3-0 on the road this season, fanning an incredible 54 hitters and walking just 14 in 46 innings of work.  With the calendar moving to a new month, it’s important to highlight his dominating 9-3 mark and 2.58 ERA in 15 career starts in July.

Colorado returned home to celebrate a 7-3 victory of the Giants last night in the first game of an 11-day, 10-game homestand that will lead the team into the All-Star break.  “We’re in a good position right now to really start getting hot and continue with some momentum,” Thursday night’s starter Aaron Cook said.  The club has won three of its last four games.  Expect the winning to continue in the Mile High City with the calendar turned to July, as the Rockies have won at least 15 games during the month in each of the past three seasons.  Colorado’s 47-30 record in July since 2007 is the fifth-best record in the majors over that span.  Contrary to its opponent tonight, the team has a respectable 17-14 mark against divisional opponents (+180).

Rockies starting pitcher Jhoulys Chacin is 4-7 with a 3.51 ERA in 12 appearances (11 starts) in 2010.  Despite being saddled with a 10-3 loss in his last start, the second-year starter tallied a career-high 12 strikeouts on the road against the Los Angeles Angels.  He allowed five runs (two earned) and five hits in just six frames in that contest.  The right-hander brings a 2-3 record and 4.80 ERA in six home outings (five starts), allowing opposing hitters to bat just .229 against him.  Expect much of the same tonight, as Chacin has held the Giants lineup to a .042 average in his career, tossing eight scoreless innings and allowing just a single hit in two outings.